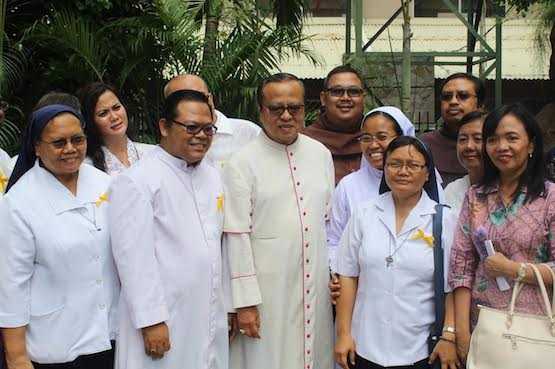 Jakarta Archdiocese has established a justice and peace commission in response to social problems faced by marginalized groups in Indonesia’s capital city.

Archbishop Suharyo told the gathering that establishing the commission was one of his aims when he became Jakarta’s archbishop six years ago.

"The commission is important, especially in a big city such as Jakarta, where there is so much injustice," he said.

The number of marginalized people such as those who do not have access to government assistance because they have no identity card, victims of unfair trials and violence as, well as residents forcibly evicted by authorities are growing, according to church officials.

"Our church’s presence is truly significant for society if we advocate social and humanitarian problems," Archbishop Suharyo said.

He reminded those attending the launch about a message from Pope Francis emphasizing the importance of justice and peace, respect for environment and human dignity.

"Through this commission, the archdiocese will inspire, facilitate, coordinate and animate parishes to present a church that fights for justice and peace," he said.

Ursuline Sister, Irena Handayani of the migrant care division said that they would pay look at preventing human trafficking by assisting migrant workers and victims of violence.

"Catholics in the archdiocese have already attempted this, but was not properly organized. Under the new commission, organization will be improved,” she said.

Tri Warmiyati of the gender equality and justice division said one of their first priorities will be to help victims of domestic violence.

Azas Tigor Nainggolan, of the commission’s law and human rights division, pledged to ensure all of the archdiocese’s parishes has a legal team.

"We will create more and work with more lawyers," he said.