Non-European saint a first for any Indonesian parish A statue of St. Andrew Kim Tae-gon stands in front of the church named after him in Kelpa Gading, Jakarta. (Photo from The Catholic Times)

A parish in Jakarta has been dedicated to St. Andrew Kim Tae-gon (1821-1846) who was Korea's first native priest, making it the first Indonesian parish whose patron is not a European saint.

Archbishop Ignatius Suharyo Hardjoatmodjo of Jakarta presided at the ceremony along with Auxiliary Bishop Benedictus Son Hee-song of Seoul.

"So far, Indonesian churches have been dedicated only to European saints and I wished for saints near to us," said Archbishop Hardjoatmodjo. "Finally, we decided St. Andrew Kim, the first Korean martyr priest."

Last year, Jakarta Archdiocese sent a letter to Cardinal Andrew Yeom Soo-jung of Seoul expressing its wish to dedicate a parish to St. Andrew Kim and requested to have a relic.

The St. Father Andrew Kim Tae-gon Church can accommodate some 2,400 people. The church has a three-meter-high gate which has 24 wooden reliefs featuring scenes of the life of the saint. In front of the church stands a statue of the saint wearing a Korean traditional hat made of bamboo and horsehair.

Bishop Son said St. Andrew Kim linked Korea and Indonesia, "Independence Day of Indonesia is Aug. 17, 1945. Exactly 100 years earlier on Aug. 17, 1845, Father Andrew Kim was ordained a priest," said Bishop Son. "We all are a family under the Catholic faith," he added.

Archbishop Hardjoatmodjo said the history of martyrdom in Korea has much in common with Indonesia's history of persecution and martyrdom.

"I wish the passion of Korean laypeople who embraced Catholicism without any foreign missionary and fostered the saint-priest be a good model for Indonesian Catholics," said Archbishop Hardjoatmodjo. 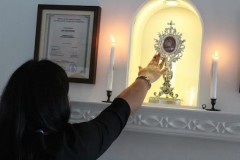