Campaign reminds Catholics to pray for the country, priest says 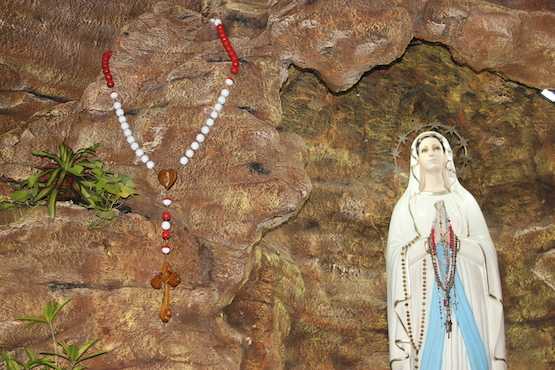 Jakarta Archdiocese has launched a new rosary, decorated in the colors of the Indonesian flag as a way to help Catholics to pray for national unity. (Photo by Katharina R. Lestari)

The Jakarta Archdiocese began May — which is dedicated to Mary — by launching a rosary decorated in the red and white colors of the Indonesian flag.

"We choose the red-white rosary because it is a marker of the campaign called Amalkan Pancasila [implement Pancasila]. Red and white reminds us of our national flag. Red means courage to defend the truth and white means sincerity," Father Hieronymus Sridanto Aribowo, head of the archdiocese's commission for liturgy, said following the launch of the rosary on May 1 in Our Lady of the Assumption Cathedral Church in Jakarta.

Pancasila, Indonesia's national ideology, is seen by Indonesians as a sign of national unity. It stipulates belief in one God, a just and civilized society, a united Indonesia, democracy guided by consensus, and social justice for all citizens.

Father Aribowo said the archdiocese conceived the campaign in the hope that it would help balance the faith of local Catholics.

"Saying the red-white rosary can build an awareness to pray for the nation through the intercession of Mother Mary. It reminds us of being 100 percent Catholic and 100 percent Indonesian," Father Aribowo said.

During the launch led by Archbishop Ignatius Suharyo of Jakarta, at least 2,000 red-white rosaries were distributed to Massgoers who packed the cathedral church.

The archdiocese's 65 parishes launched the red-white rosary simultaneously on May 1. Jesuit Father Ignatius Ismartono, who led the launch of the red-white rosary at Peter Canisius Chapel located in Canisius College, Jakarta, said the rosary campaign "was a worship that should be developed."

"We still can see intolerance, poverty and environmental destruction," he said.

Yuliana Yuke, a parishioner at the cathedral church, said intolerance remained an issue in the country.

"Indonesia still has problems with religious harmony. So I will say the red-white rosary every day for the unity of Indonesia," she said.