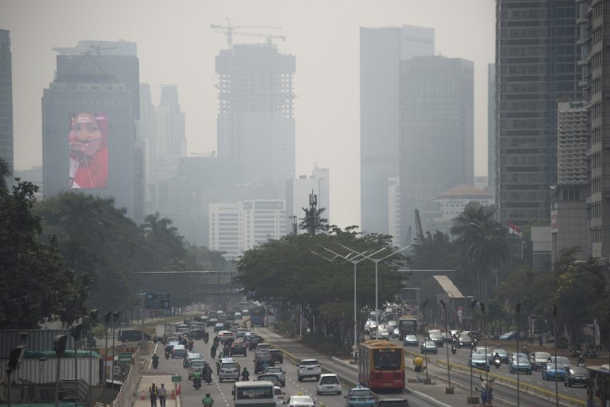 Traffic clogs a road in Jakarta's city center as haze almost obscures a promotional billboard for the 2018 Asian Games in this Aug. 8, 2018 file photo. Organizers worried the chronic pollution would mar the world's second-biggest multi-sport event. (Photo by Bay Ismoyo/AFP)

"Things will get worse if the city and central government don't do a better job of managing air quality," Ahmad Safrudin, executive director of the Committee for the Phasing Out of Leaded Fuel, said on Jan. 14.

"Nothing has been done so far," he said. "Big and small industries, construction projects, and the burning of waste have contributed to the worsening air quality in Jakarta."

The warning comes as other countries in Asia have also been battling fearsome levels of dust and smog since the start of the new year.

Bangkok was spraying water cannons into the air on Jan. 15 and considering cloud seeding to try and beat the haze as Greenpeace Asia said it had the 9th-worst level of air pollution among all world cities. New Delhi was No. 1, Dhaka No. 2. and Kolkata No. 3.

Since 2016 the level of PM2.5 in Jakarta, the Indonesian capital, has regularly exceeded safety standards mapped out by the World Health Organization (WHO).

In central Jakarta, levels stand at 42.2 micrograms per cubic meter (μg/m3) a year, nearly three times the target set by the government (15 μg/m3), and more than quadruple what the WHO considers safe (10 μg/m3).

Southern parts of the capital have only fared slightly better, measuring 37.5 μg/m3 on average.

Experts warned that in many parts of the city, ground-level ozone (O3), a major component of smog formed when sunlight interacts with emissions from vehicles and factories, frequently soared above the government's intended cap of 50 μg/m3 from 2011-2018.

Particulate matter (PM) is able to penetrate deep inside the lungs and enter the blood system. Chronic exposure to particles like sulfate, nitrates, ammonia, sodium chloride, black carbon and mineral dust contributes to the risk of developing cardiovascular and respiratory diseases as well as lung cancer.

Every year hundreds of Indonesian children aged under five die due to the effects of pollution, much of it caused by haze, according to a report by the WHO dating back to March 2017.

Jalal, founder of the Jakarta-based Thamrin School for Climate Change and Sustainability, said a ministerial regulation from 2008 aimed at better controlling the ambient air quality has never been properly enforced.

"They seem to be having trouble enforcing the regulations as many construction projects have not yet finished, and more infrastructure is waiting to be built," he said, citing ongoing construction of the country's first mass rapid transit (MRT) system.

A 1999 law on controlling air pollution has also been neglected, he added.

The first phase of the MRT will span 15.7 kilometers from South Jakarta to Central Jakarta. It is scheduled to begin running in March. Phase two will extend for another 7.8km to the west of the city.

Jalal quoted a 2017 report from Greenpeace Indonesia saying that eight coal-fired power plants are operating within 100 kilometers of the capital, producing hazardous pollutants that affect the city.

"That's why this issue must be dealt with by the Jakarta administration and the central government as it also affects neighboring provinces," he said.

In the middle of December, environmentalists and dozens of citizens threatened legal action on behalf of city residents unless the government adopts remedial measures within 60 days to improve air quality.

One of the demonstrators, Jakarta-born artist Melanie Subono, said the public has the power to effect change.

"They still haven't implemented the regulations so the ball is in our court," she said. "Let's do this together. I don't want to die as a result of air pollution."