A Kachin refugee family eating near Lung Byeng village in Waimaw township in Kachin State in January 2017. The state has seen many human rights abuses by Myanmar's military. (Photo by Hkun Lat/AFP)

The jailing of six Myanmar soldiers for killing three Kachin refugees is a rare move but human rights lawyers say more reform of the country's military and civilian justice system is needed.

Mar Khar, a Myitkyina-based human rights lawyer, said it is too early to regard the case as a positive development as it raised the question of whether the military really wants to reveal the truth and justice.

"The important thing goes beyond admitting the killings — the military must take responsibility for preventing its soldiers committing rights abuses," he told ucanews.com.

Mar Khar, a Kachin Baptist, said the judiciary must be independent and open, while the government and military must not put pressure on judges.

The lawyer, who has defended unlawful association cases, said many rights abuses continued in ethnic areas and were not decreasing even under the Aung San Suu Kyi-led government.

"In terms of human rights violations, there are no signs of improvement under a civilian government as the government fails to give priority to human rights and solving rights abuse cases," he said.

A military tribunal sentenced the six soldiers to 10 years in jail on Jan. 20 for killing three civilians in conflict-stricken Kachin State.

Three internally displaced persons — Nhkum Gam Awng, 31, Maran Brang Seng, 22, and Labya Naw Hkum, 27, from Mai Hkawng camp — were taken into custody by soldiers from Light Infantry Battalion 319 as they returned to the camp after collecting firewood near Hka Pra Yang village on May 25, 2017. Three days later, their bodies were found in nearby Maikaung village.

Two officers and a battalion commander from the 319th Light Infantry Regiment were among those charged with murdering the trio.

Brang Dee, a Lashio-based lawyer from the Kachin Lawyers' Network, said the military had to admit the killings because of the weight of evidence. 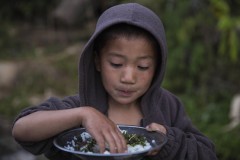 He said the military doesn't investigate rights abuse cases and the public had initiated finding witnesses and evidence to reveal the truth in this case.

"The main barrier is that the military is not under a civilian-led government, so the military decides cases with its own military tribunal, not a civilian court," Brang Dee told ucanews.com.

The lawyer said there had been no improvement in the rule of law under Aung San Suu Kyi, especially in rights abuse cases involving the military.

Civil wars continue to plague many ethnic-minority states in Myanmar, particularly in the northern, mainly Christian Kachin State. The conflict has spread into the northern part of neighboring Shan State.

Since hostilities resumed in 2011 following a 17-year ceasefire, more than 120,000 people have been forced to flee their homes and they remain in Kachin and Shan.

In another case, seven soldiers from Light Infantry Battalion 362 who admitted shooting dead five unarmed villagers in Shan State in August 2016 were sentenced to five years in jail with hard labor.

But the cases of two Kachin Baptist teachers who were allegedly raped and murdered by soldiers in 2015 and the enforced disappearance of Sumlut Roi Ja, who was detained by soldiers in October 2011, have underscored serious human rights violations by the military in ethnic areas.

Amnesty International said in a June 2017 report that Myanmar's institutional and legislative framework maintained obstacles to holding perpetrators of human rights violations to account and delivering justice, truth and reparations to victims and their families.

"Most perpetrators of past and current human rights violations continued to evade justice," Amnesty added.