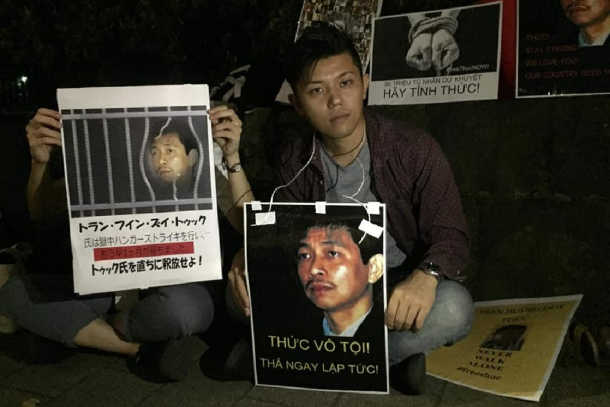 Activists in Vietnam showing their support for Tran Huynh Duy Thuc who was sent to prison for 16 years on subversion charges in 2010. (Photo courtesy of Thuc's family members)

Tran Huynh Duy Thuc decided to end his hunger strike on Sept. 16 after 33 days of asking the government to respect the nation's laws, family members said following a monthly visit.

Thuc's two elderly sisters and a daughter visited him at a camp in Nghe An Province's Thanh Chuong District on Sept. 15-16.

They said the 52-year-old was thin and tired but in high spirits.

When they were talking with Thuc, who was separated by thick glass, camp officials required that only family matters be discussed and not his activist activities.

After they strongly protested against this prohibition, camp guards took Thuc away. Then police forced the family members to leave, dropping them on a road five kilometres away.

They returned to the camp to meet Thuc again for an hour the following day. Camp officials treated them less harshly, but still cut off their conversation when they talked about the campaign for him to be freed.

The family members asked the government to enforce provisions of an amended penal code that came into effect earlier this year.

They said Thuc and other political prisoners had been prosecuted under laws that violate the both the nation's constitution and the ruling communist party's principles.

The penal code states that the punishment for his alleged crime should only be one to five years of imprisonment, but he has already been in jail for nine years.

Thuc began his hunger strike in mid-August to protest demands from security officials that he 'accept his crimes' in order to be granted a reprieve from the country's president.

The Buddhist activist was sentenced to 16 years in prison for 'attempting to overthrow the communist government' in 2010. He continues to protest his innocence.

Catholic lawyer Le Cong Dinh said Thuc stopped the hunger strike for health reasons, but would continue to demand that the government respect its own laws by freeing him and other political prisoners.

On Sept. 12, activists launched a petition seeking a review of Thuc's case based on current laws.

The online petition, signed by 320 civil groups and individuals, was sent to the National Assembly, the prime minister, various state agencies and foreign diplomats