Catholic priests and nuns hold placards during a protest against the arrest of Jesuit priest Father Stan Swamy in Secunderabad the twin city of Hyderabad, on Oct. 21, 2020. (Photo: Noah Seelam/AFP)

Bombay High Court has extended the hospitalization of jailed Jesuit Father Stan Swamy until July 5 after his health condition was said to be critical.

The top court in Maharashtra state on June 17 ordered medical treatment to continue for the 84-year-old priest at Catholic-run Holy Family Hospital in state capital Mumbai.

The hospital’s medical director has reported that Father Swamy “continues to be critical and requires intensive care,” observed the division bench of Justice S.S. Shinde and Justice N.J. Jamadar.

The court, which was scheduled to hear the priest’s bail application, posted its next hearing for July 3.

Father Swamy was admitted to the hospital on May 28 after his health deteriorated in prison.

Originally, the court allowed his hospital treatment until June 14, which was later extended to June 18 before the latest extension.

We are happy that the court was kind enough to allow continuation of his hospitalization. We continue to pray for his good health

Fellow Jesuits welcomed the court order but said they have not seen the medical report and therefore have no details about the priest’s condition.

“We don’t have any exact information about his health,” Father A. Santhanam, a Jesuit lawyer who is closely monitoring the case, told UCA News on June 18

“We are happy that the court was kind enough to allow continuation of his hospitalization. We continue to pray for his good health,” said Father Santhanam, a practicing lawyer in Tamil Nadu state.

Father Swamy was jailed on Oct. 9 last year, a day after the federal anti-terror National Investigation Agency arrested him from his residence in Ranchi, capital of Jharkhand state, accused of sedition. 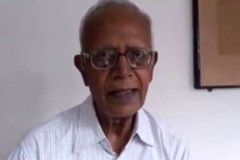 The elderly priest suffers from Parkinson’s disease, hearing impairment and other age-related ailments that reportedly worsened during his nearly eight months in jail.

He was hospitalized following a court order after his health drastically deteriorated and he was unable even to eat and drink properly. He tested positive for Covid-19 a day after his hospitalization.

The priest is among 16 accused of conspiring with outlawed Maoists to topple the federal government. All have denied the allegations.

Father Swamy has championed the rights of tribal people in Jharkhand state of eastern India for almost five decades.

He and others accused in the case maintain they were framed to silence them after they criticized policies of the pro-Hindu Bharatiya Janata Party, which leads the federal government in New Delhi and some state governments.