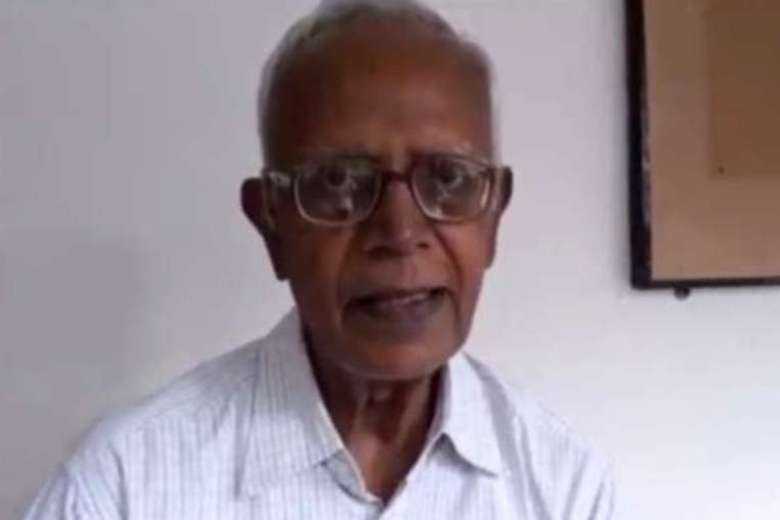 Father Stan Swamy was moved to Holy Family Hospital in Mumbai city on May 28. (Photo: YouTube)

Jesuits in India have sought prayers for their jailed 84-year-old confrere Father Stan Swamy after he tested positive for Covid-19 in a hospital.

The elderly priest was moved to church-run Holy Family Hospital in Mumbai city on May 28 following a court order after his health deteriorated since his incarceration began on Oct. 9 last year.

“We appeal to everyone to pray for the speedy recovery of Father Swamy, who is now suffering from Covid-19 apart from other sicknesses,” said Father A. Santhanam, a Jesuit lawyer based in Tamil Nadu state who is monitoring Father Swamy’s case.

“We are informed that Father Swamy is now a Covid-19 patient, but no other details of his health are disclosed. We can now only pray for his speedy recovery and good health.”

He said Jesuits are “very much concerned” about Father Swamy’s health.

Media reports quoting prison officials said Father Swamy was vaccinated in Taloja Central Jail on May 18 against the pandemic.

In the second week of May, the priest’s family members sought his release on grounds that he had contracted Covid-19 and was unable to even speak to his lawyers.

Father Swamy also suffers from Parkinson’s disease, hearing impairment and other age-related ailments that require him to seek help even going to the toilet.

He also requires assistance with eating and drinking because of his Parkinson’s disease and advanced age. Nearly eight months in jail have further deteriorated his health, Father Santhanam said.

Bombay High Court’s order for the priest to be moved to a hospital also allowed two assistants to support him and a police officer to guard him during his treatment.

Father Swamy is one of 16 accused in a sedition case and was arrested from his residence on Oct. 8 in Ranchi, capital of Jharkhand state in eastern India.

The following day, a special court of the National Investigation Agency (NIA), a federal anti-terror combat agency, remanded him to Taloja Central Jail in Mumbai.

The priest has denied all allegations against him and accused investigators of framing him and others because they had criticized the federal government.

The NIA court denied him bail twice, forcing him to twice move the state’s high court for bail — one based on his poor health and the other on a regular basis.

While hearing his bail plea on health grounds on May 21, the court spoke to Father Swamy through video conferencing. Sensing his poor health, the court gave him the option of moving to a government or private hospital for his treatment.

But he rejected the offer, saying his only prayer was to be released on bail so that he could go back to his home.

The court rejected his request and adjourned the case to June but told his counsel that he could approach the court any time if his client needed medical assistance.

Father Swamy’s health deteriorated on May 28 and the court was told of his condition. The court then granted permission to move him to Holy Family Hospital.