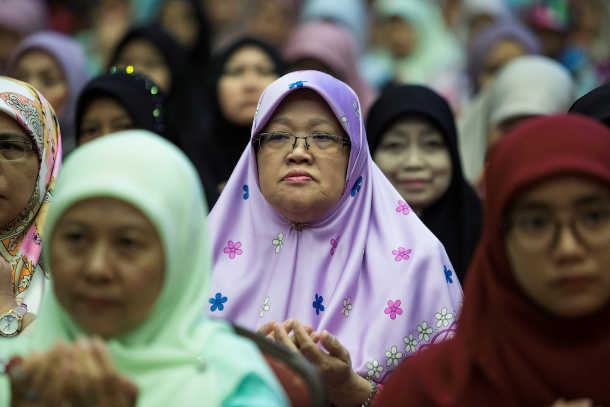 Muslim women pray after Sultan Hassanal Bolkiah's speech in Bandar Seri Begawan on April 3. He called for Islamic teachings to be strengthened as new Shariah punishments, including death by stoning for gay sex and adultery, came into force. (AFP photo)

Brunei is usually a quiet and tranquil country: crime is virtually unknown, traffic is light and its political scene is among the most stable in the region. Yet in recent weeks the small nation has been in the international spotlight over the introduction of draconian anti-homosexual and anti-adultery laws that had been delayed for some time.

There are now calls for boycotts and the withdrawal of Western honorary degrees and other honors that had previously been bestowed on Sultan Hassanal Bolkiah, who is the last absolute monarch in Southeast Asia. However, the Brunei government remains resolute in insisting that this is an internal affair and that the law be implemented without external interference.

What exactly is behind this insistence in the face of international and celebrity condemnation? Commentators have pointed to the possibility that the monarch, who is the second longest reigning monarch in the world after Queen Elizabeth II of Britain, is preparing for abdication. Sultan Omar Ali Saifuddien III, the father and predecessor of the current sultan, abdicated in 1967 and, in his capacity as adviser, guided his young successor at the beginning of his reign up to and beyond Brunei’s independence from Britain in 1984.

Although such guidance would be invaluable for Crown Prince Al-Muhtadee Billah, who faces the daunting challenge of ruling after a long preceding reign, it does not really explain the phasing in of this severe interpretation of Shariah. It is more likely that rather than being preparation for Brunei’s post-Sultan Hassanal Bolkiah future, it should be seen more as part of preparing Brunei for its inevitable post-oil future.

Brunei’s economy and legendarily generous social services continue to be over-reliant on income from oil and gas exports, with up to 90 percent of all exports in 2018 being from this sector. Brunei’s proven oil and gas reserves should last for some years yet, but it is likely that the demand and prices for these commodities will fall as the global economy turns increasingly toward renewable and alternative sources of energy.

In recent years, the Brunei government has attempted to diversify into other sectors to improve self-sufficiency and wean the population from reliance on oil. Sectors that have seen the most activity include tourism, logistics, halal food branding and even agriculture, but these ventures have yet to yield the expected results. There remains some concern over the nation’s long-term future.

Since 1984, the Brunei government has put the idea of Melayu Islam Beraja (MIB) at the center of its national philosophy — an expression of the intention to build a nation that is Malay, Islamic, with a monarch as ruler.

However, this philosophy does not really distinguish Brunei from its larger neighbors, Malaysia and Indonesia. Both countries have commonalities in terms of the Malay and Islamic culture, as well as having sultans as local rulers, albeit with much more limited powers. Indeed, in the 1960s, there were discussions regarding Brunei’s possible integration into one of these countries. These moves failed, mainly due to the inability to find a satisfactory method to divide Brunei’s massive oil wealth.

However, with the diminishing importance of oil and gas, there is a risk that these dormant ideas may reawaken in the years ahead. Brunei probably does not view this reawakening favorably. The last time that these ideas ran rampant was in 1962, when the leftist Brunei People’s Party carried out an armed insurrection to prevent the nation from joining Malaysia. Although the insurrection failed, the incident ensured Brunei’s independence and triggered the policy of confrontation between Malaysia and Indonesia in the 1960s. Inside Brunei, a state of emergency was declared and the sultan’s absolute power still stems from this legal framework.

The ideology of MIB and the phasing in of Shariah can be viewed as part of an attempt to distinguish Brunei from its larger and more liberal neighbors, particularly in terms of putting Islam and the monarch at the absolute center of political, social and religious life. These measures serve not only to secure the status quo but also perhaps to ensure Brunei’s continuing independence in the long term.

The road ahead requires imagination

The current situation, therefore, should be seen in the context of how Brunei views its uncertain future. Undoubtedly, Shariah could be viewed as a useful tool to deal with political opponents. Yet, as a tool, its utility is questionable. Defendants will have to be caught in a particularly wild party in flagrante. The law, as it stands, requires a confession or at least four Muslim witnesses and, even if convicted, Brunei has not carried out an execution since 1957 (when the country was still under British rule) despite maintaining the death penalty on its statute books.

More worrying perhaps is the chilling effect on the LGBTQI+ (lesbian, gay, bisexual, transgender, queer, intersex +) community, with Western news outlets reporting that LGBTQI+ Bruneians are seeking asylum abroad. Brunei has never really been a haven for this community. While the expression of this lifestyle is limited in Brunei, most affluent Bruneians can go to more liberal parts of Southeast Asia for a reprieve from restrictive laws.

In the meantime, boycotts may be useful in raising awareness of the issue, but they rarely lead to a useful outcome. Western boycotts of hotels will have little effect on Brunei, whose economy is more reliant on exports to East Asia rather than activities with the European Union and the United States. Historically, sanctions and boycotts have not really worked in the region. It was not punishing Western sanctions that opened Myanmar to the world but rather ASEAN’s close engagement and support of gradual reforms that succeeded in making progress.

If there is a genuine desire by external actors to resolve this matter, a more imaginative approach than the ones taken thus far will be required.

*Will Summers is an alias used by the author who is a former diplomat and a long-time observer of Thai and international politics.