It's been a long road to peace for veteran Kachin leader

Upcoming peace conference must be inclusive of all ethnic armed groups, he says Manam Tu Ja at a workshop on drafting key principles and characteristics for the Federal Union of Myanmar which was held in Yangon from June 30-July 2. (Photo from KSDP Kachin Facebook)

Manam Tu Ja joined the Kachin Independence Organization when he was 29. Before that, he was a dentist.

The Catholic leader served 34 years in the organization and led the Kachin delegation that participated in drafting Myanmar's 2008 constitution.

Tu Ja's homeland is a predominately Christian region and still suffers outbreaks of fighting between the military and the organization's armed division, the Kachin Independence Army. More than 100,000 people have been displaced after a 17-year ceasefire agreement broke down in 2011.

"Civil war can only be solved through political means and ways," says Tu Ja who is now 70 years old.

Ethnic civil wars in Myanmar's resource-rich regions have occurred ever since the country gained independence from Britain in 1948.

Tu Ja was vice president when he left the KIO in 2009 to enter party politics, but his Kachin State Progressive Party were barred from contesting the 2010 election by the military government due to alleged links with the armed resistance.

But, in the historic 2015 general election, Tu Ja founded the Kachin State Democracy Party which fielded 55 candidates, winning four seats including one in the national parliament.

Tu Ja, who was chairman of the party, however, lost his own race in Myitkyina constituency. "Despite this my ultimate goal of equality and self-determination for ethnic minority groups will not change," said the Kachin Independence Organization leader-turned-politician. 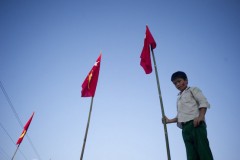 Aung San Suu Kyi's National League for Democracy won a landslide victory in last November's election and many hope that this will help the peace process.

Nobel Laureate, Suu Kyi has pledged that the new civilian government will prioritize peace. She is currently preparing for the 21st Century Panglong Conference, to build "a genuine, democratic federal union enshrining self-determination and nationwide equality," according to the Ethnic National Affairs Centre. It's expected to be held late August.

Tu Ja has high expectations that the wide-ranging conference will end decades-long insurgencies and bring "genuine federalism" one step closer.

"What we want is genuine federalism, decentralization, resources and power-sharing," said Tu Ja.

Ongoing fighting in some ethnic areas such as Kachin and Shan states must be halted while the country is preparing for peace talks, he added.

In an effort to find common ground before the talks, 17 ethnic armed groups are holding a summit in Mai Ja Yang, a war-torn border town in Kachin state, on July 26-29 according to a Global New Light of Myanmar report.

Last October, eight out of 20 ethnic groups signed a national ceasefire pact with the then quasi-civilian government.

But distrust still remains between Myanmar's military and the ethnic armed groups who feel their rights have been trampled upon for years.

Fighting continues in some areas especially in the north and east of the country where the military is on the offensive against non-signatory groups such as Palaung and Kachin rebels.

Suu Kyi has pledged to be inclusive and the military has reportedly said that they will support the new government's peace talks.

It remains unclear how small ethnic armed groups such as Palung, Kokang and Arakan armies will be involved because the military has repeatedly said that those groups need to give up their arms before joining the negotiation table.

"The peace conference must be inclusive of all ethnic armed groups," said Tu Ja. "Small groups must not be left behind or the conflict may erupt again."

Tu Ja stressed the importance of negotiation among key stakeholders such as the military, government and ethnic armed groups.

"We will know exactly at the upcoming peace conference whether Suu Kyi's talks will move in the right direction of genuine federalism or not," he said.