It’s back to school in Bangladesh after 18 months

Students, parents and teachers are happy but fret over recouping lessons lost during the prolonged pandemic shutdown 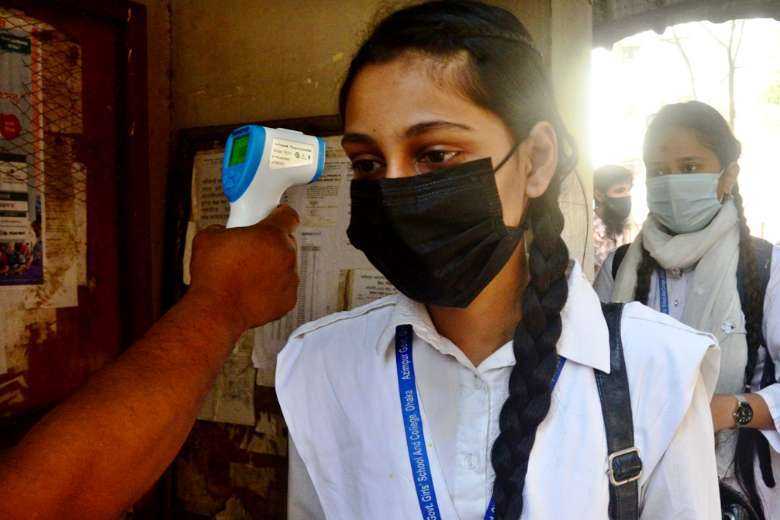 A school official checks the body temperature of a student upon her arrival at the Azimpur Government Girls School and College in Dhaka, Bangladesh, on September 12, 2021. (Photo: AFP)

Schools and colleges in Bangladesh including those run by the Catholic Church are bracing for academically challenging times ahead with students returning to their classrooms after a protracted pandemic break of 18 months.

Primary, secondary and higher secondary level education institutes reopened on Sept. 12 as the country’s Covid-19 virus situation eased with a drop in new infections and deaths. But it will be a massive task to make up for the academic and extracurricular losses due to prolonged school closures during the pandemic, parents and teachers say.

Like most South Asian countries, most Bangladeshi children and their teachers couldn’t transition to remote learning due to low connectivity and device affordability, UNICEF noted. A study conducted by BRAC, a Bangladeshi non-government organization, found out that about 56 percent of the country’s students were not connected to online or recorded classes during the 543-day shutdown.

Since then, Bangladesh has recorded 1.53 million infections and 26,972 deaths due to the virus, according to government data. Some 1,950 new cases and 41 deaths were registered on Sept. 13.

About 13.9 million people or about 8.5 percent of its estimated 170 million citizens have been fully vaccinated so far.

Education Minister Dipu Moni warned all education institutes to maintain mandatory health procedures and social distancing or face punitive action. A festive mood prevailed across the country with teachers and staff greeting students with candy and flowers at the gates of schools and colleges.

“The school has come back to life again,” gushed Tanvir Ahmed, a teacher at Jessore Zilla School in southern Bangladesh. The attendance on the first day was good and students seemed happy to be back, he said adding that all health safety measures were in place.

But the real battle lay ahead, said the heads and teachers of Church-run institutes.

“However, it is true that there is a difference between a classroom and online teaching. Imparting academic lessons is fine but it is not possible to teach human values online. So, we have to work hard now with all concerned — students, parents and teachers — to plug the gap,” Brother Pereira told UCA News.

He was also concerned about those students falling behind in studies and facing problems in their next classes, a problem that was much more serious and widespread in rural areas where schools could not afford to conduct online classes due to lack of technology and infrastructural facilities.

Purnita Jengcham, the headmistress of Church-run Dorgachala Junior High School in Mymensingh Diocese in north-central Bangladesh, said it was an “irreparable loss” for her students and wondered how to make up for it.

“We could not conduct online classes for students as they are from poor ethnic families and the internet [connectivity] is very poor here. I cannot find words to describe the academic loss students have suffered over the past 18 months,” Jengcham, an ethnic Garo Catholic, told UCA News.

Her rural school has 64 students on its books and about 70 percent of them began attending classes over the past three days, she said.

“We are contacting parents to bring the rest of the students to classrooms,” Jengcham said. “We will be working hard to make up for the lost time, but are not sure how much we can achieve.”

Augustine Gain, the headmaster of Church-run St. Francis Xavier Junior High School in the southern Satkhira district, expressed similar concerns. Most of its 170 students come from poor backgrounds and were forced to work to support their families during the pandemic, he said.

“School closure was bad, so I see this reopening as a positive sign. Irreparable damage has been done and it won’t be possible for us to recover fully. But we are trying hard to get the students back on track again,” he added.

Parents said they were glad schools had finally reopened. “There was not much to do at home, so my daughter was depressed. She is now happy to return to school,” Mohammad Jakir Hossain, the father of a fifth-grade student at Udayan Higher Secondary School in Dhaka, told UCA News.

“The girl’s future now depends on the teachers. As a parent, we will cooperate as much as we can,” he said.

Faruque Hasan, an eighth-grade student from Rajapur High School in Natore district, said he was happy to be in school again but also worried about getting back into the academic groove.

“Our school did not offer online classes, but some teachers taught us privately. We may be lagging behind students in the city,” he said. “Now that the school has reopened I hope I will be able to make up for what I have missed with regular classes.”