It's amazing what people don't know about the nativity

A UK survey showed that knowledge of the nativity story was generally high and accurate, but there were also some comical misconceptions. 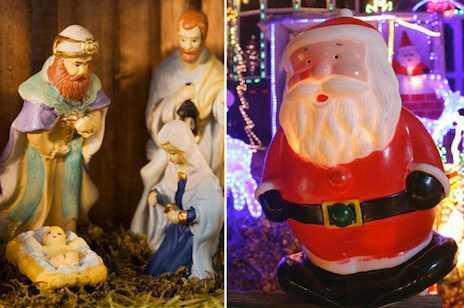 Perhaps it is because of the harmonious scenes on Christmas cards showing Mary, Joseph and the baby Jesus – without any hint of scandal.

But according to a survey of more than 2,000 people, only a quarter of the population is aware that the couple were not married when the Virgin Mary discovered that she was pregnant with Jesus.

While many could be forgiven for confusion over Mary and Joseph’s exact marital status, the study also highlights more unexpected gaps in the nation’s knowledge of the Christmas story.

Scores of people tested thought Jesus was placed in a Moses basket rather than a manger.

Surprising numbers even thought that, instead of the Shepherds being the first to visit the baby Jesus, Father Christmas called in to the stable in Bethlehem to pay his respects.

Others seemingly confused the birth of Christ with the Battle of Hastings, mistaking Herod for “King Harold”.

Meanwhile a handful suggested that Mary and Joseph were “on their first date” when the Angel Gabriel announced that Mary was with child.

The pollsters ICM asked just over 1,000 children and 1,000 parents to take a short multiple-choice test to gauge their knowledge of the Christmas story on behalf of the Bible Society.

Overall it found high levels of knowledge about the birth of Christ despite recent census figures showing a sharp drop in the number of people who would describe themselves as Christian over the last decade.

And, despite lower attendances at Sunday services in recent years, the poll found evidence that just over half of all families are planning to attend, or have already attended, a school nativity play this year.

Overall 98 per cent of those tested correctly identified Bethlehem as Jesus’s birthplace according to the Bible – although a handful did suggest Beirut. Meanwhile nine out of 10 remembered that he was placed in a manger, and 83 per cent singled out the Angel Gabriel as announcing the news to Mary that she was to have a child.

But when asked about Mary and Joseph’s relationship status at the time, six out of 10 assumed that they were married.

Full Story: Scandal of Mary and Joseph passes most Britons by – as they place Father Christmas by the manger