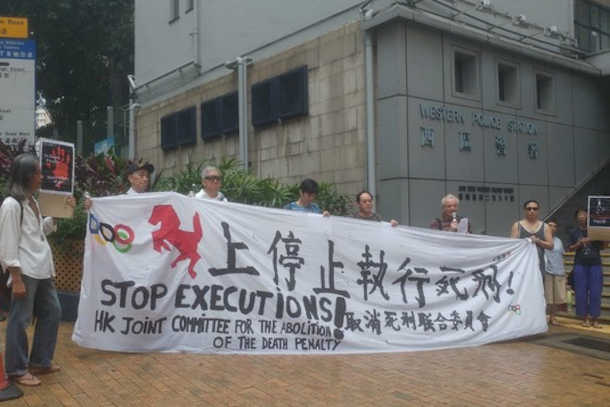 Father Mella (fourth from right) with members of the 'Abolish the Death Penalty Group, AI-Hong Kong' outside the Japanese Consulate and China's Liaison Office to submit a petition letter requesting the two governments abolish the death penalty. (Photo supplied)

An Italian-born priest and others have attempted to lodge a petition seeking the abolition of the death penalty with representatives of the governments of both Japan and China.

The petition was taken to the Consulate-General of Japan in Hong Kong and the main liaison office there of the mainland Chinese government.

On the Oct. 10 'World Day against the Death Penalty', Father Franco Mella of the Pontifical Institute for Foreign Missions, did so along with fellow Hong Kong activists opposed to capital punishment.

The petitioners sang, shouted slogans and submitted the petition, which personnel at both locations refused to accept.

The group expressed dissatisfaction with the officials being unwilling to pass on the petition to their respective governments.

Born in Milan, Father Mella arrived in Hong Kong in the 1970s and then spent some 20 years in China.

He has devoted his life to fighting for the rights of the disadvantaged.

Japan is one of the only developed countries in the world that has maintained the death penalty.

In July, the wealthy island nation executed 13 people who had been found guilty of involvement in acts of terrorism by the Aum Shinrikyo doomsday cult, including a 1995 sarin poison gas attack on Tokyo's subway.

Some prisoners were notified only immediately before their execution took place and even the families of the condemned were not advised in advance.

China in 2017 was the nation that carried out the largest number of executions in the world, followed by Iran, Saudi Arabia, Iraq and Pakistan.

Hong Kong has had an 'Abolish the Death Penalty Group' for 20 years.

Father Mella, who is a member, said some crimes resulting in executions world-wide could not be considered heinous.

And the priest told ucanews.com that the death penalty was cruel and did not effectively prevent crimes from happening.

"The national crime rates of countries that abolished the death penalty have not seen rapid growth," he said.

The Italian priest noted that several Southeast Asian countries are considering its abolition.

He said that in some cases capital punishment had been used to further political and other vested interests.

At the age of 70, Father Mella did not except to see the death penalty abolished globally in his lifetime, but added that he would none-the-less continue to campaign against it.

Several years ago, he and others lobbied Malaysia to remove capital punishment from its statute books, and the goal was this year coming to fruition.

On 'World Day against the Death Penalty', the Malaysian Cabinet announced it had agreed to abolish executions and that more than 1,200 death sentences would be suspended.

In Malaysia, public opinion had turned against capital punishment.

Jackie Hung, project officer of the Catholic Justice and Peace Commission of Hong Kong Diocese, welcomed the Malaysian decision, but noted that many other Asian governments still had not scrapped executions.

And, in some countries, local law enforcement officers carried out extra-judicial killings, she said, citing as an example the Philippines where thousands of people have been killed in a so-callled 'anti-drug war'.

"Christianity respects the life and dignity of each individual," Hung said.

Life was endowed by God and no one should have the power to deprive others of it, including governments and law enforcement agencies, she added.

In August, Pope Francis approved an update of Catholic teachings to state clearly that the death penalty constitutes an inadmissible attack on human dignity