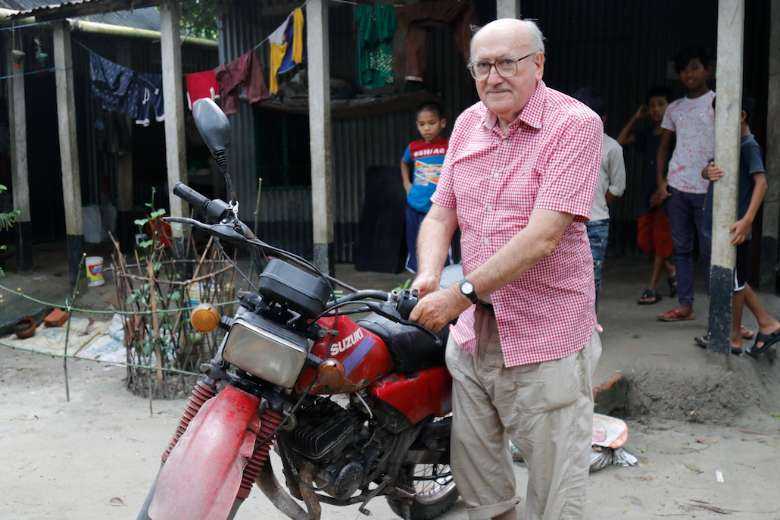 Father Carlo Buzzi with his motorbike in Belkuchi in Sirajganj district of northern Bangladesh where he has served migrant ethnic Catholics for 24 years. (Photo: Stephan Uttom/UCA News)

Every Sunday, the people from Belkuchi village hear the approaching sound of an old Suzuki motorbike and know an Italian priest is back for his pastoral work.

Father Carlo Buzzi, a 78-year-old missionary from the Pontifical Institute for Foreign Missions (PIME), has been coming to this northern Bangladeshi village for the past 24 years.

People gather around him when he gets off his motorbike in front of the tin-sheet-covered shed that serves as the church for some 350 Catholics in the village under Sirajganj district.

Father Buzzi offers Sunday Mass for the faithful and visits villagers, greeting them, enquiring about their well-being and offering solutions to various problems, whether to do with education, employment or family disputes. Even the Muslim villagers often come to seek his advice.

The village had fewer than 20 Catholics when Father Buzzi began his mission in the interior village of Sirajganj town, a river port on the banks of the Jamuna. Belkuchi is a subparish under Ave Maria Church at Gulta that has some 800 Catholics. Both come under Rajshahi Diocese.

It takes the priest two hours to cover the 50 kilometers on his motorbike from his main parish. With advancing age, the ride is increasingly tiring as part of the road to the mission is often peppered with water-filled potholes. But in a district where cycle rickshaws and three-wheeled auto-rickshaws remain the main modes of transport, Father Buzzi continues to rely on his motorbike.

The priest has no special riding gear. After folding up his gabardine trousers above the ankles to save them from soaking in rain and pothole water, he covers himself with a plastic raincoat as he prepares to leave for Belkuchi.

Father Buzzi arrived in Gulta Parish in 1997 and soon became aware of the presence of ethnic Garo Catholics in Belkuchi who had migrated from the north-central Mymensingh Diocese to escape poverty. They have been employed in local weaving and apparel factories since the 1980s.

The priest built a tin shed for local Catholics to gather and worship, naming it Sacred Heart of Jesus Church. He also organized them into a community village named after Sister Sueva, a Bangladeshi Garo nun martyred by rebels in Sierra Leone, West Africa, in 1999.

Father Buzzi then reclaimed and restored a British-colonial era Christian cemetery in Sirajganj that was illegally occupied by Muslims for decades.

He is now busy running four pre-primary schools and an education sponsorship program for children and adults in Sirajganj town.

Catholic missions in Gulta and Belkuchi cover the entire Sirajganj district. There are seven Catholic churches in neighboring Pabna and Natore districts, which are home to some 15,500 Catholics.

After nine months of Bengali language studies, he worked for Catholic charity Caritas. He ran 20 schools for children and illiterate adults, operated 48 rice banks for poor farmers, some 20 silk-worm cultivation and weaving centers for women and won over 200 court cases involving land disputes.

He then served in Christ the King Church in Naogaon district and churches in Pabna, Natore and Bogra districts. In each parish he ran schools and hostels for poor boys and girls. Father Buzzi continues his education ministry in Gulta and Belkuchi as a major tool to lift families out of the vicious cycle of poverty.

Liton Deo, a 60-year-old Garo Catholic, came to Belkuchi about 40 years ago and began working as a security guard in a handloom factory.

He now earns a monthly salary of 9,000 taka (US$106). “But my daughter is now studying in a college thanks to the generosity of Father Carlo,” Deo told UCA News.

Deo foresees a better future for his daughter after she graduates from college, an achievement none in the family even thought of. It will be a turning point for the Deos like so many other Catholic families in the area.

Father Buzzi says he always wanted to work in a poor country. In Bangladesh, he found out how poverty cripples communities of people.

“In our country, we wonder what should we eat today — pork, mutton or chicken? But people in many countries like Bangladesh wonder if they would have food to eat today,” Father Buzzi told UCA News.

When he arrived in Bangladesh, the country was still reeling under the impact of the 1971 War of Independence and the ensuing political upheavals alongside frequent natural disasters like floods and cyclones.

“From the beginning, I emphasized education because without education no good thing can be sustainable and social integration is impossible,” the priest said.

He also wanted to work among non-Christians and develop good interfaith relationships through his work. “This is so essential for Christians in a Muslim-majority country,” he noted.

After being convinced that he did not come to convert the Muslims, we allowed him to build the church and to do everything freely

Deo recalled that before the arrival of Father Buzzi, Christians in the area hid their religious identity fearing reprisals from their Muslim neighbors. “Everything changed for good since Father Carlo came. We live with joy today,” he said.

Initially, Muslims suspected the priest was trying to convert them. But Father Buzzi won their hearts with constant dialogue and helping them renovate a local school.

“We were fascinated by his behavior,” Mohammad Ali, 52, a local Muslim cleric, told UCA News. “After being convinced that he did not come to convert the Muslims, we allowed him to build the church and to do everything freely.”

Like his predecessors, Father Buzzi has prioritized education and social development in the five mission areas he’s worked in during the past 45 years.

His time in Bangladesh has been fruitful, he said. “I did not waste my life. It may not have been so good had I been to other places. I have remained busy here serving people.”

Back in Ave Maria Church, Father Carlo Buzzi is neither worried about the future of the local Church nor concerned about where he will die or be buried.

“When I get older and am unable to move any longer, I will move to a congregational house. I don’t want to disturb anyone,” he said.

“I want to stay in Bangladesh and live with the people as long as I am alive. I should be buried at the place where I die so that my body is not transported by spending extra money.”