Missionary work began in Mongolia only in 1992, and it has only some 1,500 Catholics in a population of 3 million 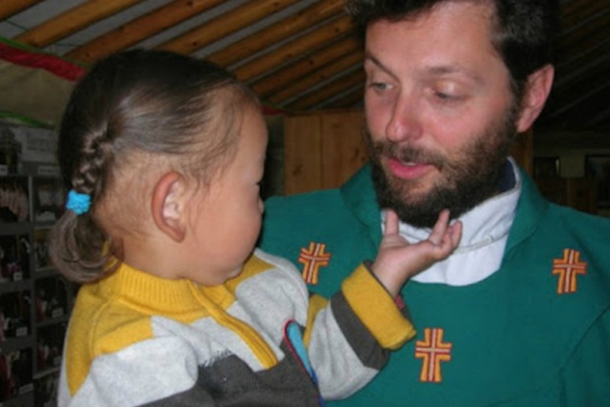 Italian missionary Father Giorgio Marengo with a child in his mission parish in Mongolia. He was appointed head of the Apostolic Prefecture of Ulaanbaatar on April 2. (Photo: Facebook page: mongolialive.com)

Pope Francis has appointed Italian missionary Father Giorgio Marengo as head of the Apostolic Prefecture of Ulaanbaatar that covers the whole of Mongolia.

The 45-year-old priest of Consolata Missionaries, officially known by its Latin name Institutum Missionum a Consolata (IMC), has been working in Mongolia since 2003.

The April 2 appointment also elevated Father Marengo to the rank of a bishop, naming him bishop of the titular Diocese of Castra Severiana.

The bishop-elect was his congregation’s regional counselor for Asia and superior for Mongolia.

He was also the parish priest of Mary Mother of Mercy in Arvaiheer, the central city of Mongolia, known for traditional crafts, goat herding and equestrian sports.

Father Marengo takes the position of Bishop Wenceslao Padilla of the Congregation of the Immaculate Heart of Mary. Bishop Padilla, a Filipino, died in September 2018.

Bishop Padilla is credited with laying the foundation for the modern Church in Mongolia, where he arrived in 1992 with two confreres to open a mission in the country, which then had no church or members of its own.

Historically, the Church began in Mongolia during the time of the Mongol empire in the 13th century but ended almost together with the Yuan Dynasty in 1368. Successive regimes then prohibited Christianity.

After Mongolia became a democratic nation in 1991, Catholic missionaries came back to work in the area, which resulted in the establishment of the Apostolic Prefecture of Ulaanbaatar in 2002. Thousands at risk of homelessness in Mongolia Thank you. You are now signed up to Daily newsletter
The lead missionary of the area, Father Padilla, was appointed prefect of the prefecture in July 2002.

The mission area of Mongolia has some 3 million people, but Catholics are barely 1,500. The prefecture has six parishes and some 70 missionaries, including 45 nuns and lay volunteers.