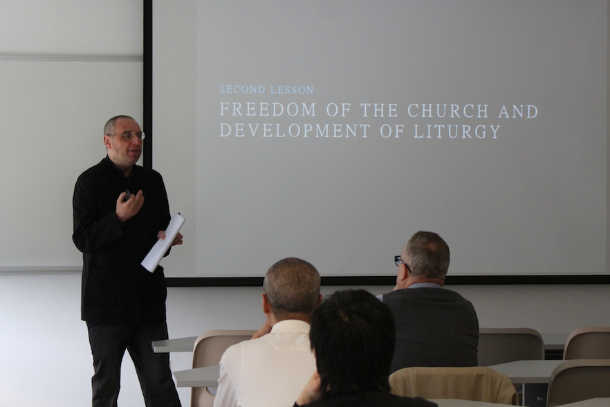 Italian composer and writer Aurelio Porfiri visited Hong Kong in January to teach a series of lectures on the history of Catholic-inspired music and discuss the main challenges the Church is facing with its sacred music nowadays. (ucanews.com photo)

An Italian composer and writer visited Hong Kong at the start of the year to teach a series of lectures on the history of Catholic-inspired music, and talk about the main challenges facing the sacred music of the Church, which Pope Francis said in 2017 has become permeated by "superficiality and banality."

Aurelio Porfiri, a prolific composer who released his album "Macau Stories" in 2015, spent two weeks teaching in the territory at the invitation of the Centre for Catholic Studies of the Chinese University of Hong Kong.

The former educator at the University of Saint Joseph in Macau delivered a six-class lecture series entitled "A Journey in 21st Centuries of Catholic Music" from Jan. 16 to Feb. 2.

"In China, they are usually taught from Baroque music, but it is meaningless since Baroque was very late. Before that, there was also the Patristic era, Medieval and Renaissance periods," Porfiri said.

Others, like Father John Baptist Zhao from Hebei, say China has experienced an increase in home-grown liturgical songs in recent years, but that keeping standards high remains a problem in the country, as does the chronic shortage of sacred music composers and hymns.

"Many great saints such as Saint Ambrose and Saint Jerome also spoke about church music.

"Moreover, starting from Pope John XXII, who was the first Pope to issue a document on church music, many popes wrote documents directly talking about sacred music or addressing the problems it encountered.

"When I told those who came to my lectures about that, they were so surprised because no one had ever told them about it before," he added.

In fact, a lack of appreciation of how important the music is, coupled with scant knowledge about the history of why it was introduced, and the purpose it serves, are among the main obstacles to its further development, according to the Italian, who formerly served as substitute organist of the Vatican City Vicariate in Saint Peter’s Basilica.

Porfiri is now recognized in the Cambridge Companion to Choral Music as one of three 20th- and 21st-century Italian Church composers "whose choral music clearly exhibits the influence of national traditions."

"People think that the sacred music is not important in the Church, but that is deeply mistaken," he said.

"The music in the liturgy is the liturgy itself, and the liturgy develops as an acoustic, musical liturgy. That is why the Church devotes a lot of resources to develop it, because it knows its importance, and understands how music can be good for us.

If the music is a weak interpretation of the liturgy, it fails in its goal of helping to glorify God and sanctify the faithful, he said, adding that, worse yet, it could create more distance between Catholics and God.

Nowadays, many churches around the world defer to commercial or pop music in bringing the liturgy to life, but Porfiri also considers this a mistake.

"Especially in the Western world, they think that doing the music in a very commercial way, maybe in a pop style, with guitar and drums, is a good way to glorify God and attract people, especially young people, to the Church. But that’s wrong," he said.

"We go to church to experience another kind of atmosphere, something from another world. Incorporating commercial or ‘worldly’ music totally contradicts what you are supposed to do. It’s a big problem today."

He said those who go down this route often justify it by citing the Second Vatican Council, arguing its documents exhort Catholics to embrace the world.

"We need to be careful about that. Jesus came to the world to convert us; but we are converting ourselves, not to Him or to the Church, but to the world. And Vatican II never said we need to embrace commercial music," he noted.

"Moreover, according to Vatican II, music is an integral part of the liturgy, and the music has to be dignified. We should respect traditional Catholic music. If it isn’t good, the liturgy suffers," he said.

"The problem nowadays is no one reads those documents for themselves. They just repeat what they have heard about it from others."

Based on his discussions about church music with young Catholics at conferences and seminars, he said they were "more radical than me," and "would rather hear Gregorian chants, which they think are very spiritual, than pop music or something like that."

"Young people today are attracted by the real alternative message [religion offers]. If they decide to take the plunge [and embrace Catholicism], they really want to see that their faith is different from the secular world," he said.

Using commercial music to draw people to the Church is akin to false advertising as it sends a "fake message," in his opinion.

His love affair with music began when a nun taught him to pray in Latin while he was a young altar server.

Later, he sought out a formal tutor and then earned a degree in choral music at the Naples Conservatory of Music, San Pietro a Maiella. Upon graduating, he began regularly performing at his local church.

"The more I study, the more I see what people are doing today is not good. So I started to write books and articles, and compose music myself," Porfiri said.

In 30 years he has published 38 books and 700 articles and recorded over 10 CD albums as well as over 100 musical compositions in print from publishers in China, France, Germany, Italy and the United States.

He has also taught and conducted church music in Macau and Shanghai, held seminars and been invited to conferences all over the world.