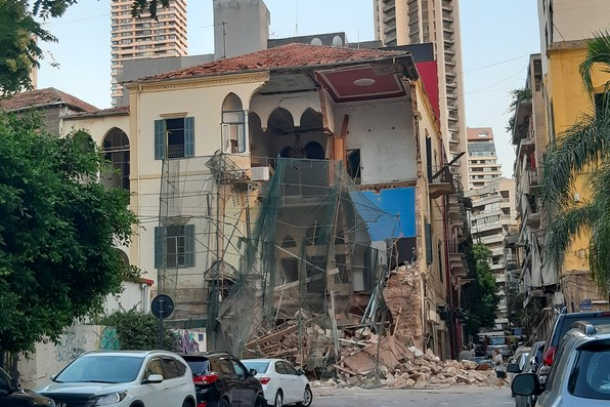 A damaged house in the Ashrafieh area of Lebanese capital Beirut on Aug. 5, a day after a devastating blast at Beirut's port. (Photo: Janine Haidar/AFP)

From her home's balcony in Israel's predominantly Maronite Catholic Upper Galilee village of Gush Halav — or Jish as it is known in Arabic — Neveen Makhoul, 37, can look out and see Lebanon.

Like most of the village's residents, Makhoul has family in Lebanon, and as that country spiraled into an economic and political corruption crisis even before the COVID-19 pandemic and the Aug. 4 Beirut port explosions, they used church channels to send money to help their relatives. After the explosion, she said, it became even more imperative for them to send financial support.

"I have gone through a lot in my life, but I have never gone through anything like we have experienced this week. It has been really something difficult," she said Aug. 10. "Just watching the television and worrying about my family has been so painful ... I was able to connect with them ... they need everything, hospitals, hugs, small things, money, homes, and we are so close and we can't do anything."

Though they border each other, Israel and Lebanon do not have diplomatic relations and are considered enemy states. Most Maronite families who lived along the border region were divided during the 1948 Israeli Independence War, when the border was closed.

So it was with frustration, horror and a sense of impotence that many in Israel's small Maronite community, most of who live in northern Israel close to the Lebanese border, followed the unfolding news about the explosions.

"It is a very difficult feeling for us as a family, but also we identify with the Maronite Christians in Lebanon. We are the same people. Lebanon is the spiritual and historical center for all Maronites in the world, and there is not one Maronite in the world who is not hurt" by the explosion," said Amir Khalloul-Risha, 37, who lives Haifa. "It is a wound right in the heart of the Maronites, because of a group of people who do not believe in tolerance, coexistence and unity."

"This is a physical explosion but (the) social explosion has existed since the end of the (civil) war and is one which has threatened the world and the cultured, peace-loving people of Lebanon," said Khalloul-Risha. "This is very sad and places a big mourning on us. We hope this sorrow will be the last sorrow for Lebanon and will bring peace, and especially peace between Lebanon and Israel."

Many Lebanese and others have blamed political mismanagement, corruption and neglect for the inaction leading to the explosion of ammonium nitrate stored at the port since 2013 without any safety measures.

The explosion caused an estimated $10 billion-$15 billion in damages, according to the BBC, and left a reported more than 170 people dead, thousands injured and 300,000 people homeless.

Because of the corruption people believe is rampant throughout the Lebanese government and in government institutions, most people feel more confident sending their donations through the church, said Maronite Father Yussef Yakoub of St. Louis Church in Haifa.

"We donated even before this tragedy because of the difficult financial situation there. We continue with our help (through) the church, where we are sure this help will get to the people and not go to authorities who are supporting terrorists there," he said. "My fear is this thing happened and it is on the

Even though her finances have been strained because of COVID-19 unemployment, Makhoul said her situation in Israel is better than that of her family in Lebanon, so she can still manage to send money.

Maronite Archbishop Moussa El-Hage of Haifa said Maronite families have been sending money to their family members in Lebanon through church channels for some time since the economic crisis hit Lebanon, but now others, including Christians of other denominations, Muslims, Druze and Jews from Israel's north, have also been asking to donate money with his help.

"We are used to having catastrophes in Lebanon, but every time we (put our faith) in God and we love life," Archbishop El-Hage said Aug.10. "We have a responsibility to be strong and conserve this country Lebanon in the Middle East as a land of liberty, life and freedom because other countries here, excluding Israel, are completely totalitarian. So our country must remain as a beacon of light, of life, of education, liberty and freedom of expression."

The Franciscan Custody in the Holy Land also has set up a site on its website where donations can be made for Franciscans in Lebanon, and the Latin Patriarchate of Jerusalem has said that offerings taken from collections during Masses Aug. 9 and 16 would be sent to the apostolic vicar of Beirut to be given to the Lebanese people.