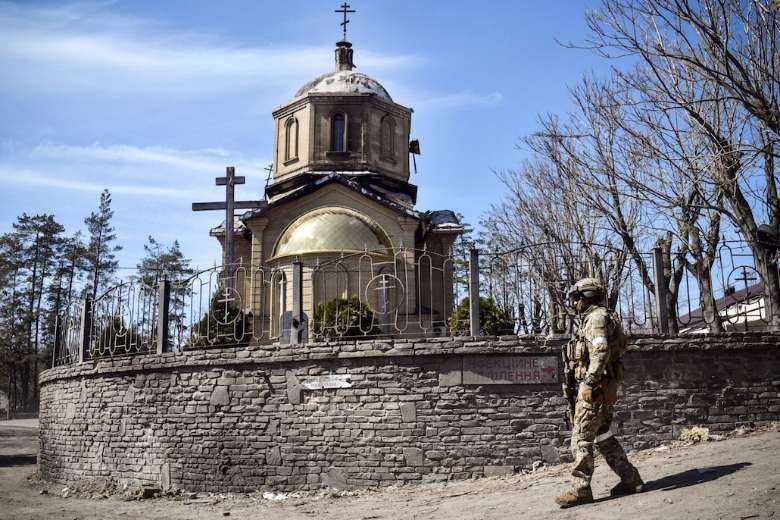 A Russian soldier walks by a church as he patrols in a street of Volnovakhaa in the self-proclaimed Donetsk People's Republic in Ukraine on April 11. (Photo: AFP)

Atheists and agnostics are laughing off the story of the original sin in the Book of Genesis, while the Philippine president once cursed God because of his personal opinion against such a story. It’s a fairy tale, he said.

Smith’s book is not about “bad people perceived to go to Hell” but a denial of Hell. As he puts it blatantly: “Hell is a theological invention!”

Asked if Heaven exists and what she would like to hear God say when she arrives at the Pearly Gates, Hunger Games actress Julianne Moore, a confessed atheist, quips: “Well, I guess you were wrong. I do exist.”

The existence of Hell’s torments prepared for hardened sinners is held by the Christian world but not by Oscar-winning actor George Clooney. Raised with deeply practicing Catholic roots in Georgetown, Kentucky, Clooney now is a certified atheist-agnostic. “I used to go to confession every week,” he told Larry King (Feb. 16, 2006).

The outgoing Philippine president, Rodrigo Duterte, once lambasted not only the Biblical creation story and the doctrine of original sin but also God himself

The actual existence of sin is being negated. Sins, like adultery and stealing, are not considered immoral acts anymore. There’s no such thing as a transgression of God’s commandments, such as the disrespect of parents, fake news in order to sell, sex without marriage, or bearing false witness against your neighbor.

According to this newfangled way of thinking, there is human weakness, a psycho-emotional frailty, a kind of complex, the likes of which are schizophrenia, messianic or Oedipus complex — or plain and simple human weakness. We should not feel guilty, they insist. We — the AI-robotics-nanotech man, woman and child — should not feel guilty because, they say, it is not healthy.

The outgoing Philippine president, Rodrigo Duterte, once lambasted not only the Biblical creation story and the doctrine of original sin but also God himself. “What was the sin? Why original?” he asked. “You’ve already sinned, but you’re still in the womb?”

For him, the Biblical story of a snake tempting Eve to eat the forbidden fruit is ridiculous. Then Eve in turn gave it to Adam and “Adam ate it. Then malice was born,” he said.

The Ecumenical Council of Trent has defined original sin as mors animae or “death of the soul.” The soul is dead due to the absence of supernatural life and sanctifying grace. But it’s not just the soul but also the body.

Physical death is a grave consequence related to the First Fall, which occurred in the Garden of Eden (Genesis 2:17 and Wisdom 1:12ff). Death unhappily assumes the character of punishment as a consequence of sin. “It was through one man that sin came into the world, and through sin death,” writes St. Paul (Romans 5:12).

YHWH sent them out of paradise after our first parents disobeyed him. However, the Creator did not put his foot on Adam’s throat and introduced his Divine Mean. YHWH instead provided hope. The narration of the First Fall is incomplete unless hope is offered.

That Adam and Eve committed the first sin, the original sin, and that eventually all thinking men and women became prone to sin, is outside the radar of belief of atheists

And we’ve heard the story in Genesis, dubbed as the proto-evangelium, when the omnipotent God did not kiss our frail human nature goodbye and said: “I’ll keep you posted.”

No, no, no! God came down nearer, not farther away. He fulfilled his promise by deciding that His Only Begotten Son became the Son of Mary. “And the Word was made Flesh, and dwelt amongst us.” (John 1:14).

That Adam and Eve committed the first sin, the original sin, and that eventually all thinking men and women became prone to sin, is outside the radar of belief of atheists like Knightley, Moore, Clooney and all ex-Catholics — but it doesn’t make it untrue.

Today, more than ever, the menace and the moral consequences of sin are undeniable. The intentional poisoning of society by fake news and gossiping, ethnic cleansing and class hatred, massacres, human slavery, dishonor of parents, clerical sex abuse, and the destruction of war in Ukraine in our theoretically “technologically sound” paradise of the Third Millennium — aren’t these symptomatic of a spiritual menace we call sin?

And rivers of blood and oceans of tears in our supposedly civilized society — and a crucified Savior?

The earliest moral case of fratricide can be found in the Book of Genesis. It is a story of Cain brutally killing his own brother Abel. But Cain would have not done it unless there was an inclination to evil in his soul, would he? That inclination to evil is the result of original sin, the lesson implied in the story.

Jesus as the sacrificial Lamb of God, crushed and broken-hearted while contemplating the heavy weight of the sins of the world, caused him inexpressible sorrow and pain

From the Garden of Eden to the Garden of Gethsemane, we find our Blessed Lord on his knees, agonizing in his body, soul and heart the vicious consequences of Adam’s Fall and our own personal sins.

Jesus as the sacrificial Lamb of God, crushed and broken-hearted while contemplating the heavy weight of the sins of the world, caused him inexpressible sorrow and pain.

Sins of women and sins of men such as extrajudicial killings, rapes, shootings and murders, terrorist attacks, pollution of innocent kids, worship of money. Sins of the past, the present and the future, sins committed in high places, sins done in dark alleys, wicked designs, yetzer and more sins — all factual dark realities in our human society.

The Lamb of God who takes away the sins of the world paid a dear price for this. His sweat, which became noticeable after the agony was over, resembled drops of blood. Medical science calls it hematidrosis.

Let those who do not believe laugh it out loud but our Catholic faith tells that to know Adam as the source of sin has led us to understand better the most beautiful thing that ever happened to humankind — that is, Jesus as the source of grace and mercy came, tightly embracing humanity, every sinner, and giving us hope in this uncertain world we live in.

“Christ has died. Christ is risen. Christ will come again!”

* Jose Mario Bautista Maximiano is a Catholic scholar, public educator, management adviser and the author of the Catholic Social Teachings in CONTEMPORARY Philippine History: 500 YOC (1971-2021), Volume Three (Claretian, 2022).The views expressed in this article are those of the author and do not necessarily reflect the official editorial position of UCA News.

VINCENT MOOKEN
The comments are based on an out dated understanding of scripture and religion. Educated people will not buy this.
Reply