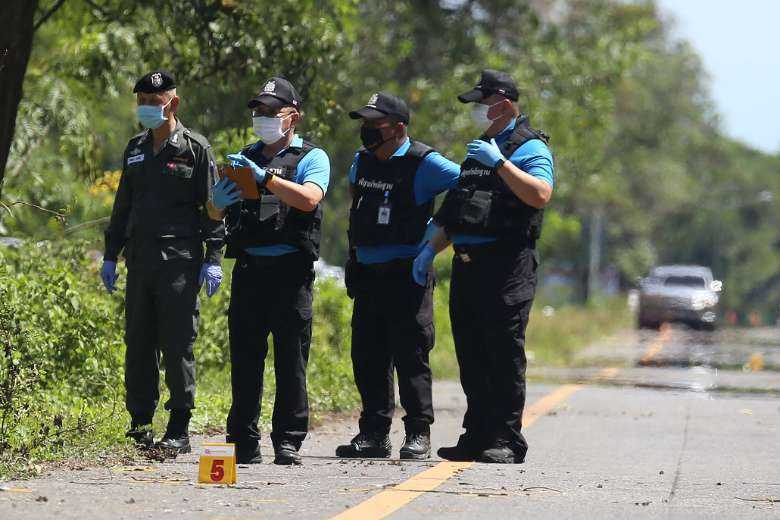 Police investigators gather at the site of an ambush on a car by suspected militants that killed three people in Sai Buri district in southern Thailand's Pattani province on April 24. (Photo: AFP)

Thailand’s simmering Islamist insurgency in its southernmost region claimed several new victims when three members of a family were shot and burned to death inside their vehicle in Pattani, a Muslim-majority province.

Four assailants riding motorbikes opened fire early on April 24 on a pickup truck driven by a 58-year-old man who was delivering products, according to eyewitnesses.

Also in the vehicle were the man’s daughter and her son. All three of them died in a hail of bullets and the ensuing blaze that engulfed the car.

The assailants targeted the vehicle and continued shooting at least 30 rounds at its occupants from M16 or M19 assault rifles, according to police.

Officials described the drive-by shooting as a terrorist attack during which two heavily armed gunmen riding pillion on two motorcycles shot the driver, whereupon his pickup careened out of control and came to a halt in a ditch at the side of the road.

The two gunmen dismounted and continued shooting at the car before dousing it in petrol and setting it on fire.

The car and its occupants may have been targeted at random, according to police, in an ongoing separatist insurgency during which tit-for-tat violence between Muslim separatists and Thai security forces has claimed thousands of lives over the years.

Suspected insurgents have been known to target innocent civilians, both Buddhists and Muslims, in the three Muslim-majority southernmost provinces bordering Malaysia, where hardline Islamists have stated their aim of ceding the provinces from Thailand to create a separate Muslim sultanate.

A day before the three family members were massacred in Pattani, Thai rangers shot and killed a suspected insurgent and arrested two others following an exchange of gunfire in the same province after the latter had allegedly thrown an explosive device at a defense volunteer outpost.

The Islamist insurgency in the three Muslim-majority provinces erupted in 2004 and Thai authorities have been unable to suppress it since.

Rights advocates have argued that heavy-handed policies by Thai security forces, including the summary arrest and alleged torture of suspected insurgents, have worsened the situation by alienating a large segment of local Muslims.

“There is no credible and effective mechanism to help investigate complaints from ethnic Malay Muslims concerning abusive, corrupt or inept officials, problems that have generated discord among the population,” Human Rights Watch (HRW) has noted.

At the same time, however, suspected Muslim insurgents have targeted numerous unarmed civilians, including teachers and Buddhist monks, in acts of violence that have been widely condemned by rights advocates.

“This vicious campaign of violence against civilians by separatist groups violates international law and undermines their cause,” said Brad Adams, Asia director of HRW, after suspected insurgents set off an improvised explosive device beside Buddhist monks on their morning alms round in Pattani province, killing one and severely injuring another.

Over the years some two dozen Buddhist monks have been killed in targeted attacks by Islamic insurgents in the three restive provinces while numerous others have been wounded.

“There is no justification for deliberate or indiscriminate attacks on civilians, which can be war crimes,” Adams said.