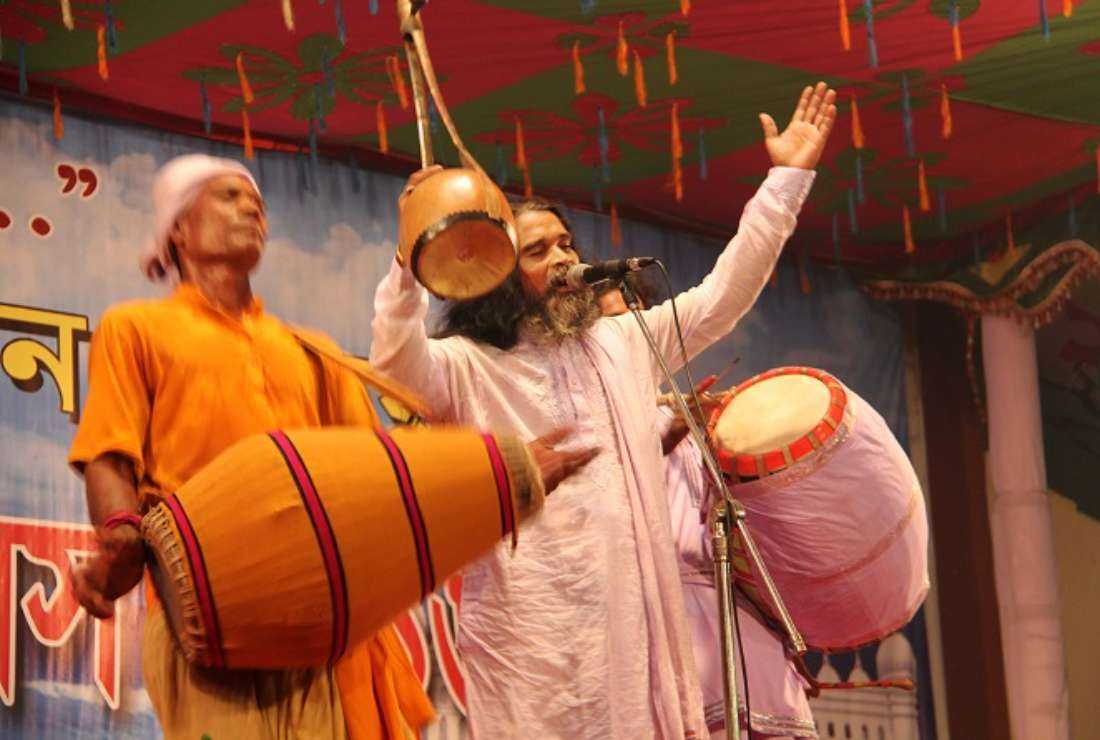 A baul singer performs during a festival in Bangladesh in 2016. (Photo: Stephan Uttom/UCA News)

Rights campaigners and cultural activists marched on the streets in southwestern Bangladesh to deplore and demand justice over the latest Islamist attack on a mystic singer, which they called an infringement of religious freedom in the Muslim-majority country.

“The situation in our country has reached such a stage where we are not able to practice our religion properly, even those who sing mystic songs are being insulted only because they are a minority,” said Moloy Kundu, a Hindu and president of Sommilito Sangskritik Jote (The United Cultural Alliance) in Narail district.

The group joined a protest rally in front of the Press Club in the district town on Sept. 4 to condemn the attack on a Baul (mystic singer) in Purulia village of Narail on Aug. 27.

The next day, the attackers stormed into an ashram of Baul singers and threatened to evict a group of singers while destroying their musical instruments including ektara (a one-stringed instrument), alleged Moin Fakir, an aide of Harez Fakir.

“I am very sad to say today that minorities in Bangladesh are being prevented from practicing their religion by Muslim fundamentalists. They are attacking minorities on religious grounds, killing followers of Fakir Lalon, and insulting them,” Kundu told UCA News.

Since the attacks Baul singers have been living in fear, said Moin Fakir.

“We are now living in fear. All we want is to live by singing songs as our own, and we do not want to harm anyone. So why attack us?” he asked.

Sheikh Tasmim Alam, officer-in-charge of Kalia police station said a case has been filed against 20-25 people including Ali Mia over the attack.

“We would take legal action after investigation,” he said.

There are no exact data on the number of cases involving attacks on Baul singers. However, local media have reported a series of attacks including lawsuits on Bauls as hardline Islamists consider them heretics and term their singing and other activities un-Islamic.

In January 2020, police arrested prominent Baul singer Shariat Bayati after Islamists filed a case against him under the country’s draconian Digital Security Act. He was charged with hurting the religious sentiments of Muslims by defaming Prophet Muhammad.

He came under Islamist ire for declaring in one of his performances that the “Holy Quran does not bar songs and music."

He was detained for nearly two months which sparked protests from civil society groups. He was granted bail only after the High Court issued a rule.

In May that year, unknown miscreants set ablaze the ashram of Baul Ranesh Thakur in northwestern Sunamganj district. The fire gutted all his belongings including his books, notebooks and musical instruments.

In 2011, an Islamist mob assaulted a group of 28 Baul singers in the Rajbari district and forced them to shave off their long hair and mustaches to socially humiliate them.

In 2014, a Baul singers’ program in Jessore district was bombed and a knife attack left a Baul killed. Another attack was reported in 2016.

Lalon researcher Surbala Ray says continuous attacks on Bauls are a huge blow to the non-sectarian, liberal and humanitarian culture of Bengalis as a whole.

She said that Bauls are attacked repeatedly, but often the news does not reach the media.

“Bauls are peaceful, non-communal so they don't even protest about it. But we have to come forward to protect them,” Ray told UCA News.

“The conscious citizens of the society have a moral responsibility to stand by the Bauls, the state should not under any circumstances take a stand in favor of the fanatical groups, and should create the space for religious freedom and respect for different opinions rather than the security of these minorities,” she added.

Father Patrick Gomes, secretary of the Bangladesh Catholic Bishops' Inter-Religious Dialogue Commission said: “All citizens of Bangladesh are entitled to freedom of religion literally but in reality the minorities including Lalon followers struggle to practice amid pressure from religious hardliners.”

Originating in Bengal of India in the 17th century, Bauls constitute both a religious sect and musical tradition. Lalon Shah popularized the tradition in the 19th century with his moving songs of humanism and religious tolerance.

Most of the Bauls are ascetics. They travel on foot from town to town singing and begging for alms, staying at ashrams and akharas (cells) but having no fixed address. Some choose to remain in their homes but live a quiet, secluded life of music and worship.

In 2005, the UNESCO listed Baul tradition as a "masterpiece of the oral and intangible heritage of humanity."