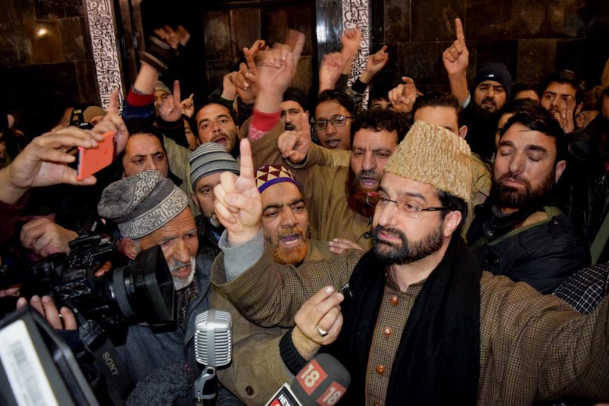 Kashmir's chief religious cleric Mirwaiz Umar Farooq addresses a crowd of supporter outside Jamia Masjid after it was 'desecrated' by some youth waving a flag of the terror group Islamic State. (Photo by Umar Shah/ucanews.com)

Muslims in India's Jammu and Kashmir state have joined to wash clean a mosque after it was desecrated by Islamic State supporters who waved the militant organization's flag inside it.

Muslims in droves congregated at Jamia Masjid in the city of Srinagar on Jan. 4 and took part in the cleaning before Friday prayers.

On the previous Friday, Dec. 29, a group of masked youths moved to the chief cleric's seat and waived the flag of the so-called Islamic State, the global terrorist organization seeking to establish an Islamic caliphate.

A video of the incident that went viral showed a masked youth waiving the group's flag while others chanted slogans.

One person was seen trying to stand on the chief cleric's chair and fix the flag on it.

The incident was shocking and has deeply hurt the sentiments of the people in this Muslim majority state, according to Sheikh Ghulam Hassan, a senior member of the mosque's management committee.

"It shows utter disregard of this group of miscreants for Islamic institutions, values and Islamic teachings," Hassan told ucanews.com.

"Such elements not only malign the name of Islam but also abuse it."

He added that Jamia Masjid has been the epicentre of region's Islamic religious life since being built 1394 and any attempt to desecrate it would be sternly dealt with.

Soon after the flag waving was reported, Kashmir's chief religious cleric, Mirwaiz Umar Farooq, appealed for worshippers and the heads of all religious organizations to assemble at the mosque to take part in the purification process.

Mirwaiz, who leads a popular demand for the region's freedom from Indian rule, said the "sacrilegious" act would damage the cause of freedom.

"The way our right to self-determination is being maligned, and attempts are being made to change its direction, won't be tolerated," Mirwaiz said.

"The whole community is against these elements."

Kashmir separatist leaders Syed Ali Geelani and Yasin Malik said in a joint statement that there are attempts to high-jack Kashmir's freedom movement and link it with a global agenda.

They said that the Kashmir struggle is purely indigenous in nature as people are fighting Indian rule.

The goal of self-determination was motivated by Islamic values, the separatists said.

On June 23, last year, the Jammu and Kashmir government for the first time admitted the presence of Islamic State in the strife-torn Kashmir Valley.

Earlier, official Indian agencies dismissed reports about the IS presence as media propaganda.

Radicalization of youth in Kashmir gained ground following the killing of the militant leader Burhan Wani in mid-2016.

During the past 30 years, an estimated 100,000 people have died in Jammu and Kashmir, including civilians, militants, and army personnel, after groups began an armed struggle to free Kashmir from Indian rule or to merge it with neighbouring Pakistan.

Both India and Pakistan have gone to war over the territory twice, in 1947 and 1965, and there have been myriad skirmishes.