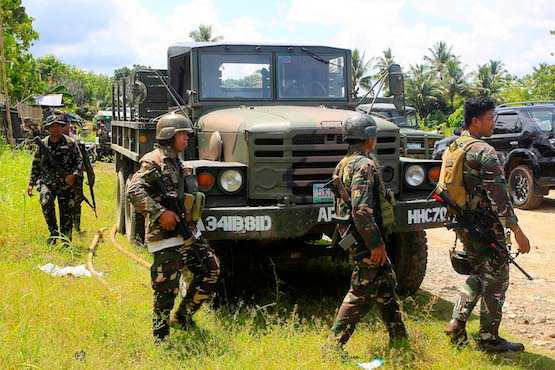 Soldiers conduct pursuit operations against terrorist gunmen who attacked a village in the southern Philippine town of Pigcawayan and desecrated a Catholic chapel on June 21. (Photo by Mark Navales)

Cardinal Orlando Quevedo of Cotabato has condemned "in the strongest terms possible" the reported desecration of a Catholic chapel by terrorist gunmen in the southern Philippines on June 21.

The incident, in the village of Malagakit, happened when about 300 gunmen of the Bangsamoro Islamic Freedom Fighters (BIFF) attacked Pigcawayan town, resulting in the displacement of hundreds of residents.

The BIFF, a breakaway group of the Moro Islamic Liberation Front that has signed a peace deal with the government, has pledged allegiance to the so-called Islamic State group.

"The crucifix and images of the Virgin Mary and Jesus Christ were destroyed while the sacred hosts were thrown all over the floor," the police chief told ucanews.com

Cardinal Quevedo described the desecration of the chapel as "wicked."

"Such acts are similar to the desecration of a mosque and the sacred Quran by non-Muslims. Both desecrations are gravely sinful," said the prelate.

Cardinal Quevedo challenged the leaders of the BIFF to punish its men who desecrated the chapel.

"If the BIFF wants to have an image as a respecter of all religions, it must punish its members who perpetrated the odious desecration and educate all its members in strictly respecting other religions," said the prelate.

The cardinal called on Catholics in Pigcawayan to restore the sacredness of their chapel.

The gunmen were seen on a video destroying religious images and burning the cathedral.

The siege entered its second month this week with government forces retaking several areas of the city occupied by the gunmen.

Governor Mujiv Hataman of the Autonomous Region in Muslim Mindanao has branded the desecration of sacred sites as "un-Islamic."

"These terrorists are nothing but hypocrites who undermine the true essence of Islam," said the governor.

The attack in Pigcawayan has displaced some 1,707 individuals and suspended classes in 14 schools, affecting at least 4,000 elementary and high school students.

The military said pursuit operations against the gunmen were continuing.