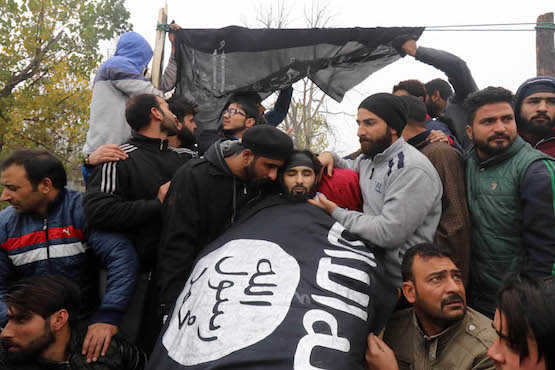 The funeral procession of militant Mugees Mir, who was killed by security forces in Srinagar on Nov. 17, 2017. His body was wrapped in an Islamic State flag as protesters carried it amid pro-Islamic State slogans. (Photo by Umer Asif/ucanews.com)

After being pushed back in the Middle East, the so-called Islamic State is claiming responsibility for violent attacks in India's Jammu and Kashmir state.

The terror group is claiming its second attack on security forces in less than four months in the Muslim-majority state bordering Pakistan.

The killed policeman was guarding the house of separatist leader Fazul-Haq Qureshi.

Attacks on security forces have become routine in Kashmir, where Islamic militants continue an armed struggle to free the region from Indian rule to establish an Islamic nation or to join with the Islamic state of Pakistan. The killing of Ahmad is more worrisome for security forces after Islamic State claimed responsibility.

State police chief S.P. Vaid for the first time confirmed that some members of militant groups in the region may have been influenced by Islamic State ideology to establish a global caliphate through violence.

A police official told ucanews.com on March 5 that it was the second attack the terror group had publicly claimed in India.

"First came the IS flags and then some youths at certain protest marches openly shouted pro-IS slogans," he said, adding that investigators have taken the claim seriously.

Islamic State earlier claimed responsibility for the Nov. 17 killing of another police officer, he said.

Some separatist leaders want a political decision, not an armed struggle, to free the region, putting them at loggerheads with militants.

Kashmir's chief Muslim cleric and separatist leader, Mirwaiz Umar Farooq, told ucanews.com that Kashmiri people have been working for an amicable solution to the Kashmir problem, and Islamic State has no role in it.

A police official in Srinagar told ucanews.com that there were several instances that proved that Islamic State is trying to influence youth in Kashmir. He said several groups on social networks were directly linked to the terror organization.

"We are keeping a close vigil on social media sites. It is through the internet that IS is trying to make its presence felt in Kashmir," the official said.

In 2014, when Islamic State flags were waved during protest marches against Indian rule, the then state chief minister Omar Abdullah shrugged it off as the act of some "stupid" youth and said Islamic State had no presence in Kashmir.

However, in March 2017, militant leader Zakir Rashid Bhat, alias Musa, released a video exhorting Muslims to fight for the supremacy of Shariah and Islam in Kashmir.

In another video, Musa asked people not to entertain the idea of nationhood, which he said was against Islamic teachings. He wanted protesters to stop shouting pro-Pakistani slogans and instead to shout "Shariyat ya Shahadat" (Islamic law or martyrdom).

The slogan is the hallmark of global militant groups that reject the idea of nation states and fight to establish an Islamic caliphate.

The last 27 years of militancy in the region have claimed at least 41,000 lives including those of security forces, civilians and militants — an average of 50 deaths a day, official records show.