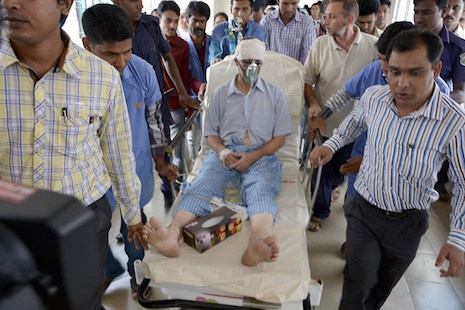 An Italian priest sits wounded in a hospital after being shot in Dinajpur, some 350 kilometers north of Dhaka, on Nov. 18. (Photo by AFP)

The Islamic State group has claimed responsibility for shooting an Italian Catholic priest in Bangladesh, the latest in a series of attacks on foreigners in the Muslim-majority South Asian nation.

Father Parolari Piero, 64, from the Pontifical Institute for Foreign Missions, was shot several times in the neck and head by three attackers in northern Dinajpur town on Nov. 18.

"Security detachments of soldiers of the caliphate in Bangladesh carried out some unique operations (including) ... targeting the Italian crusader foreigner," the jihadist group said in a statement, according to the U.S.-based SITE Intelligence group, which monitors jihadist activities online.

The jihadist group earlier claimed responsibility for the murder of Italian aid worker Cesare Tabella on Sept. 28 in Dhaka, and the fatal shooting of a Japanese man on Oct. 3 in northern Rangpur district.

The group has also taken credit for bombing a major Shiite gathering in Dhaka on Oct. 24, which killed two and injured dozens of others.

After the Nov. 18 attack, Father Piero underwent surgery in Dinajpur Medical College Hospital, but was later flown to Combined Military Hospital in Dhaka for better treatment.

Police have tightened security in all churches and the homes of foreign missionaries since the attack, said Dinajpur police chief Ruhul Amin.

"The (Islamic State) claim of attacking Father Piero is shocking and a matter of concern for us. We have been living in fear and restricted our movements since the attack," said Father Anthony Sen, parish priest of Queen of Fatima Church in Thakurgaon district in Dinajpur Diocese.

On Nov. 18, hundreds of Catholics staged a demonstration in northern Rajshahi to protest the attack. The Catholic bishops’ Justice and Peace Commission and the Bangladesh Christian Association will jointly hold a protest rally on Nov. 21 in Dhaka.

"We don’t know what the extremists want to achieve by attacking the church and missionaries but it has become a matter of grave concern. We ask the government to investigate the case properly and punish the attackers, no matter who they are," said Theophil Nokrek, secretary of the Justice and Peace Commission.

Attacks on Christians and priests are rare in Bangladesh. However, in early October, a Bangladeshi Protestant pastor narrowly escaped death after three members of the banned local militant outfit Jamaatul Mujahedin Bangladesh tried to slit his throat.

Once considered a moderate Muslim-majority country, Bangladesh has seen a rising tide of radical Islamist violence in recent times.