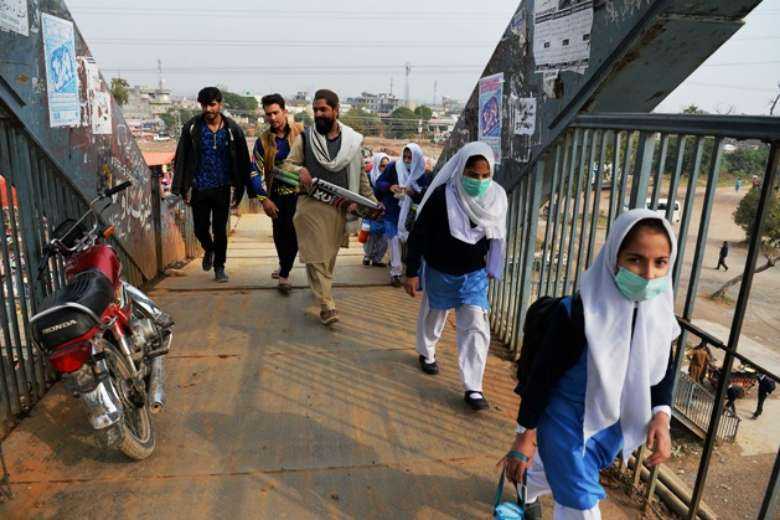 Students returning from school in Islamabad during the coronavirus pandemic in November 2020. Pakistani activists are concerned about the increasing Islamization of school education in the country. (Photo: AFP)

Education activists in Pakistan have raised concerns for the safety and well-being of non-Muslim students amid increasingly religion-centric reforms in schools across the country.

“Zuhr prayers are made mandatory in government schools in KP. It has been directed to take a break during Zuhr prayers in schools,” he stated in a tweet.

Activists say such practices in public education are loaded with religious content and nomenclature, changing the very character of school education.

“The data of minority students in Punjab is also being compiled without explaining the purpose behind this exercise. The education department has been indiscreet in introducing this step, raising fears that it will increase religious hostilities in the province,” said Peter Jacob, director of the Centre for Social Justice (CSJ).

Last month, the School Education Department of Punjab notified the compulsory reciting of Durood Shareef (a salutation to Prophet Muhammad) along with the recitation of the Quran before the national anthem during morning assemblies in all public and private schools.

A student from minority faiths who may not be able to pronounce certain Arabic words correctly, or quote a Hadith correctly, could face the accusation of blasphemy

“Around 81 percent of the reported cases under the blasphemy laws during 2021 had taken place in Punjab, where some incidents of false allegation involved students and teachers. The above-mentioned measures carry repercussions on religious tolerance and rule of law in the province,” stated the CSJ and Working Group for Inclusive Education in a press release issued on Jan. 24.

“A student from minority faiths who may not be able to pronounce certain Arabic words correctly, or quote a Hadith correctly, could face the accusation of blasphemy,” they added.

According to a survey of about 400 students, parents and educators published by the Catholic bishops' National Commission for Justice and Peace, textbooks impart compulsory Islamic education and contain hateful content about non-Muslims.

Lack of interest in studies, an increased sense of inferiority and exclusion, discrimination in educational and professional lives, diminishing interaction with Muslims and fear of hate are common concerns shared by minority Christian, Hindu and Sikh students in Pakistan.

In November 2021, Lahore High Court issued a verdict that assigned district judges to conduct inspections in schools to check the arrangements for teaching the Quran in all schools across Punjab. Some schools were sealed for insufficient arrangements.