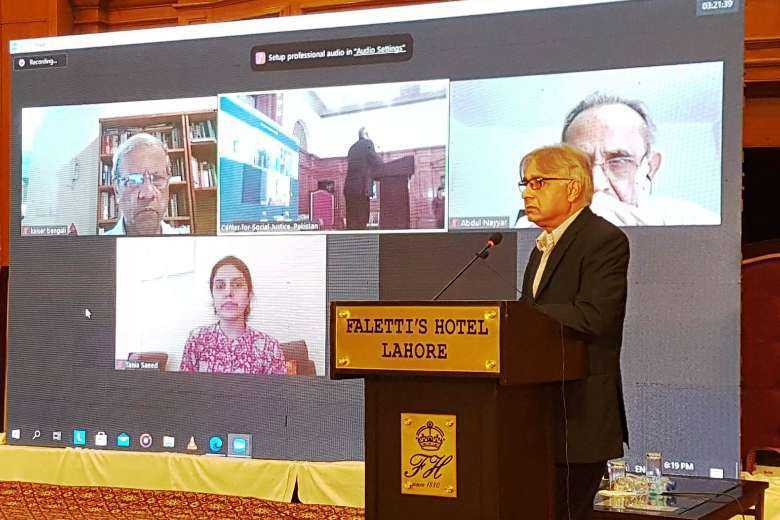 Peter Jacob, director of the Centre for Social Justice, speaks at an education conference in Lahore on July 31. (Photo: Kamran Chaudhry/UCA News)

The newly released textbooks under the country’s single national curriculum (SNC) appear to ink a similar sentiment, with Islamic instruction forming a significant part of compulsory subjects, including languages and social sciences.

Educationists in Pakistan are unanimous that “inclusion of content that is overtly Islamic comes at the expense of learning and is equally harmful for both majority and minority faiths.”

The grade 5 textbook for Urdu, the national language, narrates how a Muslim caliph after defeating Persian king Hormuzan gave him the choice to convert to Islam, be forgiven for his offenses or be executed.

Upon refusal, the king was given a cup of water as his last wish but he spilled it. “The caliph was furious but stayed true to his word. Hormuzan was so impressed he recited the Kalima [the Islamic proclamation of faith],” it states.

The implicit messaging is insidious and hard to counter, said Ayesha Razzaque, an independent education researcher and consultant.

“Are forced conversions of Hindus and Christians happening in our society acceptable because, after all, those poor souls are being saved? Does that imply that coerced conversion is acceptable?” she asked.

The lesson contradicts the SNC’s stated key consideration of “respect and appreciation for different cultures and religions in local and global context.” In fact, footnotes in some chapters even encourage teachers to send non-Muslim children out of the classroom.

“False representation of facts around peaceful coexistence results in cognitive dissonance and denial when faced with reality. There is a negligible inclusion of content reflecting people of other faiths. Islamic content in compulsory subjects infringes on rights of children and teachers of minority faiths,” she said.

Razzaque was speaking at an education conference organized by the Centre for Social Justice (CSJ) in Lahore on July 31 where speakers called for curriculum reforms, promotion of religiously inclusive education and human rights.

Fearing that students will be radicalized, they urged the government to outline specific guidelines in the National Education Policy for the provincial education departments, and textbook boards about avoiding discrimination in all learning processes.

“Education boards should focus on teacher training programs incorporating elements of analysis, critical thinking, human rights, and social justice and peacebuilding frameworks to sensitize the students on contextual issues of social cohesion, cultural and religious diversity,” the CSJ stated in a press release.

Catholic educationists have been holding similar consultations as the government prepares to introduce the revamped curriculum starting this month for the academic year 2021-2022.

Muslim students were never required to study Christianity and the subject of ethics was prescribed for non-Muslim students in lieu of Islamiat (Islamic studies) from Grade 3 onwards.

Pakistan’s constitution prohibits the teaching of religion to students other than their own faith.

However, under the new curriculum, religious education replaces ethics and will include chapters on the life of Christ, Christian beliefs, saints and personalities in the syllabus for Christian students.

The narration of historical events, especially relating to the days of the independence movement, teaches hatred against Hindus as a religious group

Archbishop Joseph Arshad, president of the Catholic Bishops’ Conference of Pakistan, and Bishop Humphrey Peters of Peshawar, primate of the United Church of Pakistan, proofread the books on religious education.

“Getting consensus from both churches was harder than drafting the curriculum. We were working on it for many decades. I thank both bishops for fulfilling our demand,” Anjum James Paul, a Catholic professor at the Postgraduate College Samundri in Faisalabad Diocese, told UCA news.

Last year Paul examined 58 textbooks published in 2019 and 2020 and approved by the federal government.

“Forty-six of them were pro-Muslim with about 80 percent content from the majority religion. The Islamic prayer is written at the beginning of every textbook. The narration of historical events, especially relating to the days of the independence movement, teaches hatred against Hindus as a religious group,” he said.

Educationists fear that Prime Minister Imran Khan’s inclination toward madrasas might lead to the loss of students’ ability to think and reason independently from the dictates of Islamic thought.

The Catholic Board of Education manages 355 educational institutes across the country including 15 higher secondary schools. Schools in Punjab opened on Aug. 2 after the summer vacations and are being compelled to adopt the new curriculum.

According to a study by the Catholic bishops' National Commission for Justice and Peace, the school and college curricula cultivate aggressive discrimination against non-Muslims, encourage blasphemy allegations and violence against minorities and liberals.

The history textbook for Grade 8 clearly states: “They [Muslims] thought that education promoting Christianity might corrupt their beliefs. The Muslims had learned an important lesson that they could neither trust Hindus nor British.”

The Arabic book for the same grade states: “Hinduism divides people on the class system.”