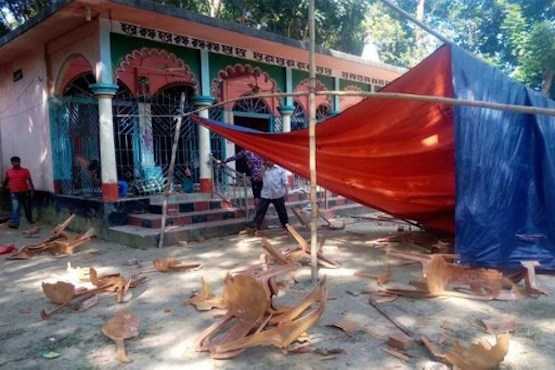 Bangaldesh residents stand near a vandalised Hindu temple in the eastern district of Brahminbaria Oct. 30. An angry mob vandalized Hindu temples and attacked property in Bangladesh after an alleged Facebook post mocking one of Islam's holiest sites, said police and residents. (Photo by AFP)

A group of Islamic radicals went on the rampage destroying temples and houses in eight Hindu villages in Bangladesh enraged by an alleged blasphemous image posted to Facebook.

They vandalized and looted 23 temples and 100 houses in an attack that went on for nearly two hours on Oct. 30. They also beat and injured more than 100 Hindu villagers in Nasirnagar sub-district, local Hindu leaders and police said.

The violence flared after Rasraj Das, a local Hindu, published on Facebook Oct. 28 a photo of the Kaaba, which Muslims consider to be the home of Allah on Earth, juxtaposed with an image of the Hindu god Shiva.

"We arrested the man for 'hurting the religious sentiments of Muslims' by posting the image and we were alerted to the danger posed by protesters but it turned out to be a shameful mayhem beyond our imagination," Quader told ucanews.com.

"We have brought law and order under control with additional forces that included the Border Guards. Eight people have been arrested in connection with attack," Quader added.

Prabir Chowdhury, secretary of the Bangladesh Hindu Grand Alliance in Brahminbaria said the incident was premeditated.

"We don’t think the Facebook post sparked the attack, but rather envy because we recently celebrated Durga Puja festival with splendor which extreme Muslims didn’t like. So, they exploited an excuse to attack," Chowdhury told ucanews.com.

Riazul Karim, local chief of Ahle Sunnat Wal Jamat, a Muslim religious organization, denied they were behind the violence and blamed it on another group, Hefazat-e-Islam.

"Hefajat-e Islam attacked the Hindu community and vandalized their homes and temples while we were holding a peaceful rally. Islam is a peaceful religion and never supports any violence. We demand the attackers are put on trial," Karim told local media.

Das said he was a victim of hackers and apologized for the offensive image. "I apologize to my Muslim brothers because someone posted a photograph on my account without my knowledge. When I came to know about it, I deleted it immediately," Das said in a Facebook post on Oct. 29.A challenge to the war on religious extremism

The Catholic Church condemned the attack and said that it was an attempt to undermine religious harmony."There are some people in the country who get easily sentimental and intolerant about their faith although they do not represent the nation as a whole," said Theophil Nokrek, secretary of Catholic bishops’ Justice and Peace Commission. "Some people disrupt religious harmony for political or other vested interests."  In a statement on Oct. 30, Bangladesh Hindu Buddhist Christian Unity Council, the largest minority forum, condemned the violence."The government pledged to follow a 'zero tolerance' policy against fundamentalism. By attacking Hindus, they are trying to challenge the government," said Rana Dasgupta, a Hindu lawyer and the forum’s secretary general."The government must be vigilant to ensure the safety and security of minorities and continue the war against terror and violence in the country," he added.Using social media to provoke sectarian violence is not new in Bangladesh.In September, 2012, an angry Muslim mob destroyed 19 Buddhist temples and over 100 Buddhist houses in southeastern Bangladesh after a Buddhist youth allegedly posted a picture of a burnt Quran to Facebook.