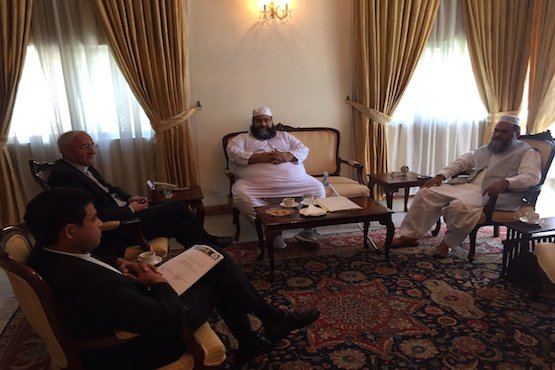 Top Islamic clerics in Pakistan have commended Pope Francis for his refusal to identify Islam with violence, saying that such a stance is beneficial for both Muslims and Christians and is a starting point for interreligious dialogue.

"By not linking terrorism with religion, Pope Francis will help promote interreligious harmony among Christians and Muslims," he said. "I urge media to give more airtime and space to such remarks which can have a positive impact on people and help combat religious hatred and intolerance."

The mufti said that there is too much emphasis on religious violence in the news.

"I do not believe it is right to identify Islam with violence," Pope Francis told journalists during the July 31 papal flight to Rome following his journey to Poland for the World Youth Day celebrations. "This is not right and it is not true."

I don't like to speak about Islamic violence, the pope said, taking into account that one sees violence every day in the newspapers, even at the hands of Catholics.

"There are violent Catholics," he said. "If I speak of Islamic violence, I must [also] speak of Catholic violence."

The pope expressed his belief that every religion has its fundamentalist groups, including Catholicism. Such fundamentalism, when it is present, can kill with language, he said, citing the words of the Apostle James.

Pope Francis' remarks came in response to a question put by a journalist regarding the murder of a French priest at the hands of Islamist militants — an attack the pontiff had condemned. The journalist asked why the pope never refers to Islam when decrying this sort of terrorist acts committed by Islamist militants.

"In my view, Pope Francis is 100 percent correct when he refuses to link terrorism with religion," said Mufti Muneeb ur Rehman, a Sufi Sunni scholar and head of Pakistan's official moon-sighting committee. "No matter what group, color, creed, ethnicity or country a terrorist follows or belongs to, he remains an individual and his acts cannot be bracketed within religion." Pope explains why he won't identify Islam with terrorism

Thank you. You are now signed up to Daily newsletter
"In the West, this negative mindset is on the rise that Islam is to be blamed for violence. Such misplaced ideology can fan more hate, extremism and violence," he said.

"Under such circumstances, the statement of Pope Francis holds great significance for Muslims and Christians in Pakistan and across the world."

"I would propose Pope Francis, the Archbishop of Canterbury, Muslim scholars and leaders of other religions sit together and discus their commonalities [because] all religions denounce inequality, oppression and social injustice," he said.

Hafiz Tahir Ashrafi, head of Pakistan's Ulema Council, also welcomed the pope's remarks. "Such a statement will pave the way for interreligious dialogue and harmony and bring people of different faiths closer and defeat the ideology of extremists," he said.

The pope has rightly pointed out that violent elements are present everywhere and that a religion cannot be held accountable for the wrongdoing of some individuals, he said.