Is there really such a thing as a just war?

On the anniversary of Hiroshima, one writer sees the concept as little more than 'retaliatory terror' 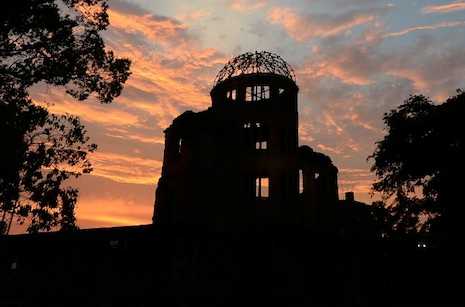 TS Eliot wrote that April is the cruelest month. For the citizens of Hiroshima and Nagasaki, including those who survived the atomic bomb, August is crueler.

Looking at the faces of elderly Japanese weeping during the recent 65th anniversary reminds one what a dreadful event it was. Those who argued for the dropping of the atomic bomb, including the late Leonard Cheshire VC, must contend with all those, such as the former priest Bruce Kent, who have always argued passionately against nuclear warfare of any kind.

Nuclear war is one thing; but what about conventional warfare? The firebombing of Tokyo during the Second World War by General Curtis LeMay killed over 100,000 ordinary people – as many as who died at Hiroshima.

Reading the newly published memoirs of the American (Protestant) theologian, Stanley Hauerwas, has made me think again about the Christian idea of the “just war”. Indeed, is the concept valid anymore?

The late pope, John Paul II, was certain, at least, that the war against Iraq was completely wrong; “War never again!” was his deep and abiding conviction.

Hauerwas was a Christian believer in the theory of the just war – until he met a fellow academic who argued him into Christian pacifism. Like the late great Dorothy Day of the Catholic Worker, he has incurred unpopularity among his fellows Americans for his anti-war stand, particularly since 9/11.

In his memoirs he writes: “To read September 11, 2001, in the light of AD 33 entailed a quite demanding alternative politics.” Asked to compose a prayer for the victims and their families, he wrote: “We pray that you will teach us to pray as a cruciform people, capable of resisting the attraction and beauty of evil…”

I think by this he meant that we must not resist acts of terrorism by retaliatory terror.

Hauerwas adds the comment: “War is impatience. Christians believe that through the cross and Resurrection we have been given the time to be patient in a world of impatience.” He would have agreed with the conscientious objection of Franz Jagerstatter, the Austrian farmer who was executed for refusing to fight in Hitler’s army, against the advice of his parish priest and his bishop.

Full story: Is the concept of just war still valid?