Is the pope reviving Liberation Theology?

Once declared "a singular heresy," this mix of politics and faith may be on the way back 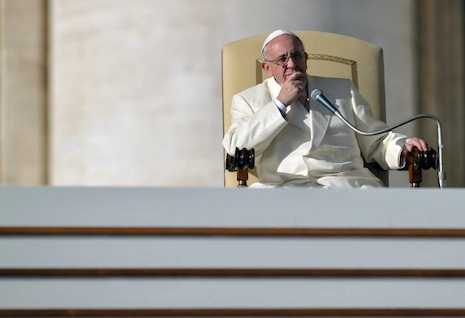 By Ambrose Evans-Pritchard for The Telegraph

Unfettered global capitalism has met its match at last. Ever since Bishop Bergoglio picked St Francis of Assisi to be his guiding inspiration and lead a "church for the poor", all his actions have been in the same direction.

Liberation Theology is taking over the Vatican a quarter of a century after Jean-Paul II systematically sought to stamp out the "singular heresy" in the radical parishes and dioceses of Latin America, a task carried out with dutiful efficiency by Cardinal Ratzinger at the Congregation for the Doctrine of the Faith.

The "preferential option for the poor" is back. The doctrine that so inflamed controversy in the 1970s and 1980, famously wedded to Nicaragua's Sandinista cause, now has a Papal imprimatur. It is close to becoming official doctrine for the world's 1.2bn Roman Catholics under "Evangilii Gaudium", the Pope's first apostolic exhortation. This will have consequences.

"While the earnings of a minority are growing exponentially, so too is the gap separating the majority from the prosperity enjoyed by the happy few. This imbalance is the result of ideologies that defend the absolute autonomy of the marketplace and financial speculation," Pope Francis says.

The conservative power of the Papal Curia is being broken. All of a sudden the Vatican is the spearhead of radical economic thinking. The best-known of the Pope's newly-minted Council of Cardinals is none other than Archbishop Reinhard Marx, the firebrand "Rote Kardinal" of Munich and author of Das Kapital: A Plea for Man.

Until now there has been no unifying or coherent voice of protest against what Pope Francis calls the "idolatry of money", or a "new tyranny" of worldwide scale that relentlessly imposes its own rules, and knows no limits. The Occupy movement is diffuse. Trade unions in the West are strangely silent, pushed to the margins by the atomised structure of modern work. Europe's political Left is so compromised by ideological defence of monetary union - a Right-wing project, or "bankers' ramp" as the Old Left used to say - that it cannot muster any articulate policy.

So the task has fallen to the Catholic Church, the greatest moral and mobilising force in the world, flanked to some degree by Anglican prelates and Lutheran bishops. This economic struggle has mass appeal. It may prove to be the launching pad for a Christian revival, inevitable in some form as militant Islam prompts Westerners to look back to their own cultural roots.

Francis was never a member of the Liberation Theology movement in his native Argentina, even if it shaped his thinking. He now regrets not having taken a stronger stance against the military junta, though the moral choices facing priests was not clear-cut. Some of his fellow Jesuits joined clandestine rebel forces. An Irish Jesuit served as pastor - with a rifle on his back - in Guatemala's Guerrilla Army of the Poor (EGP). Indeed, the Guatemalan army viewed the EGP as a Jesuit outfit. But in fanning the flames of revolt, these ultra-radical priests turned their catechists into targets of military repression.

Be that as it may, Francis is now making amends. Professor Harvey Cox from Harvard University writes in the Nation that one of the Pope's first gestures after his acclamation was to invite Peru's Gustavo Gutiérrez to Rome. This is highly significant. He is the priest who wrote the original "Magna Carta" for Liberation Theology in 1968, the symbol of the movement. They celebrated Mass together, then had breakfast. The Pope then revived the stalled beatification of Oscar Romero, the Archibishop of San Salvador assassinated by death squads in 1980 while celebrating Mass.

Full Story: Liberation Theology is back as Pope Francis holds capitalism to account