Is the media trying to frame Pope Francis over Argentina's 'Dirty War'? 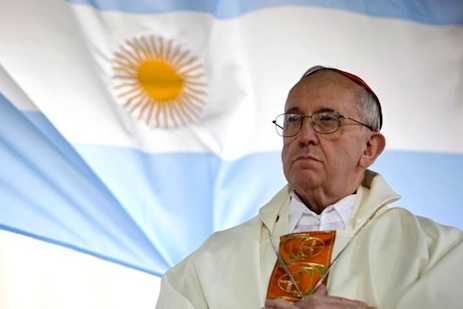 Suggestions that Cardinal Jorge Bergoglio was morally complicit in the crimes of the Argentine junta during the 1970s “dirty war” have made the rounds of the press following his election last week as pope. However, the American and French newspapers have diverged in their coverage of the story with the French reporting the accusations but giving them little credence.

GetReligion reader Thomas A. Szyszkiewicz argues some American outlets have been pushing the story.

“CNN decides to keep up the appearance that there’s something wrong with Pope Francis after the Vatican has very forcefully denied any wrongdoing on his part during the Argentine Dirty War.”

Given the denials put out by the Vatican and the lack of evidence to substantiate the charge’s Mr. Szyszkiewicz notes:

“This is simply keeping the story alive after it should be killed. Kinda like Pius XII.”

In support of his argument the sites this piece in CNN entitled “Vatican denies claim that Pope Francis failed to protect Argentina priests”.  The article begins:

Vatican City (CNN) — The Vatican pushed back Friday against claims that Pope Francis failed to protect two fellow Jesuit priests who were kidnapped during Argentina’s military dictatorship. The accusations have resurfaced since the Argentine cardinal’s unexpected election to the papacy two days ago.

A book by investigative reporter Horacio Verbitsky accuses Francis, who was then Jorge Mario Bergoglio and was head of the country’s Jesuit order, of deliberately failing to protect the two priests, Orlando Yorio and Francisco Jalics, when they were seized by the navy. They were found alive five months later. But the Rev. Federico Lombardi, a Vatican spokesman, dismissed the claims — which date back to Argentina’s so-called Dirty War from 1976 to 1983 — as false and defamatory.

The CNN story then moves to quotes from Fr Lombardi and other church spokesman rejecting the accusations made by Horacio Verbitsky. (As an aside, context as to who was making the accusations might be helpful. Verbitsky is a supporter of Pres. Cristina Fernandez Kirchner and late husband Pres. Nestor Kirchner. Pope Francis as cardinal archbishop of Buenos Aires has been a vociferous critic of the Kirchners that has led the fight against gay marriage, abortion, and governmental corruption and incompetence.)

“Nonetheless, the incident led to rumors and allegations that Francis was complicit in the dictatorship’s appalling atrocity — that he didn’t do enough to expose it and perhaps was even partly responsible for the priests’ prolonged detention, said Jim Nicholson, a former U.S. ambassador to the Holy See.

Although the allegations against Francis have never been proved, they continue to haunt him, so much so that the human rights group Center for Legal and Social Studies in Argentina opposes Francis’ selection as pope. During the years of military dictatorship, up to 30,000 students, labor leaders, intellectuals and leftists disappeared or were held in secret jails and torture centers.

The claims against the new pope have cast a shadow over what has otherwise been widely viewed as a positive start for the new pontiff, who has embraced humility and simplicity. As pope, he will have other tough questions to deal with. He takes the helm of a Roman Catholic Church that has been rocked in recent years by sex abuse by priests, and claims of corruption and infighting among the church hierarchy.”

CNN’s editorial insertion, that this casts a shadow on his papacy, is unsubstantiated. How does CNN know these allegations haunt Francis? Appearances are not against Francis but CNN. They have let their imaginations and desire for a great story drive their reporting – not a sober analysis of the facts.

The CNN piece is written in the sort of tone found in opinion journals. The New Republic, for example, published a story online entitled “When Pope Francis Testified About the Dirty War” that made the same allegations as CNN but in greater detail. It works from the transcript taken from court testimony where Francis testified as a witness and concluded Francis was not being truthful as to what he knew. It argued he did not do enough to fight the regime and acted inappropriately as superior of the Argentine province of Society of Jesus when two of its members were arrested.

The New Republic story, however, suffers from bad timing as one of the Jesuits arrested in the 70s released a statement exonerating Francis. It also is a could of, should of, kind of, may be story — long on suggestion but short of credible facts to substantiate the allegations.

I would contrast CNN’s articles with those found in the three main Parisian dailies: Le Monde, Le Figaro, and Liberation.  The French papers all reported the accusations made by Mr. Verbitsky as well as the denials by the Vatican but framed the stories so as to give Francis the benefit of the doubt. The French papers provided the context as well as the facts allowing readers to decide whom they want to believe. CNN believes Mr. Verbitsky and wants you to also.

That may be appropriate for an opinion magazine like the New Republic. But is there enough information out there from CNN to do this? I don’t think so.