Is the Indian Church marching in step? 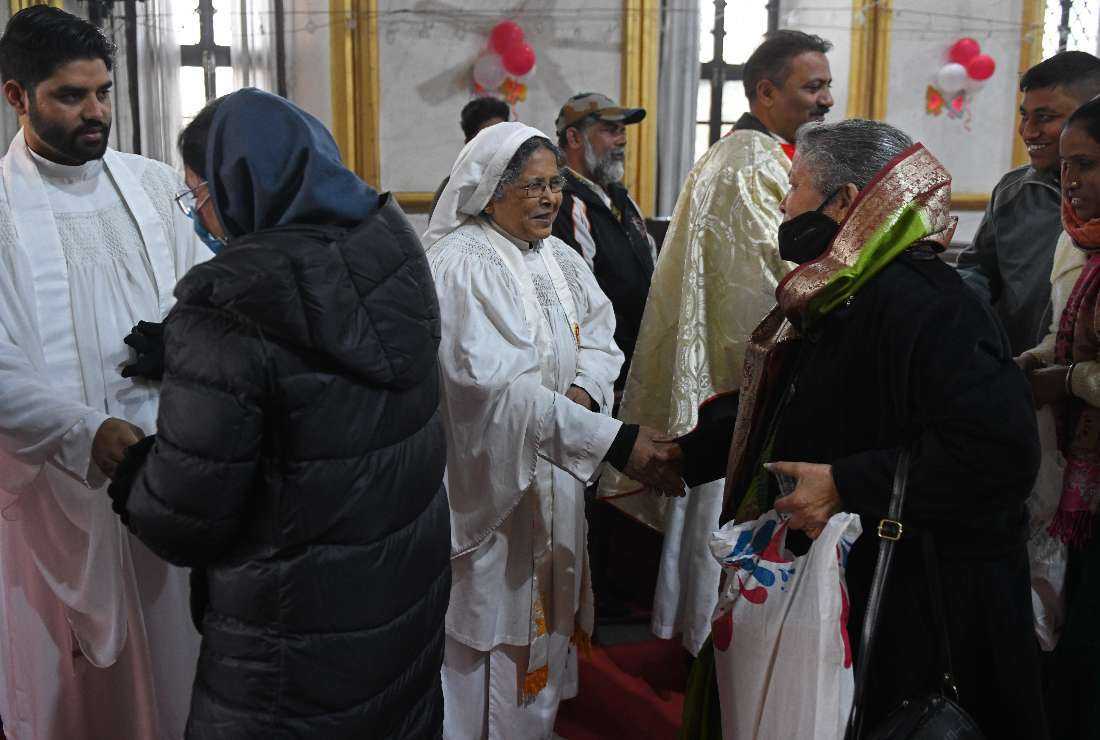 Indian Christian priests greet devotees after offering prayers during a service to mark Christmas at a church in Amritsar on Dec. 25, 2021. (Photo: AFP)

The Latin Catholic Church has more or less made public its India synthesis of the year-long diocesan process of the Synodality consultations. Presumably, the synthesis of the two Oriental Rites — the Syro Malabar and the Syro Malankara which have dioceses across the country and in various continents among the Indian diaspora — will not differ with this in any radical manner.

The synthesis of the Latin Church Synod on Synodality, held between October 2021 to June 2022, is refreshingly honest in its assessment of the crisis and challenges the Church faces within itself, and the pressures and rigors it is subjected to in the vast land of over 1.30 billion people, of which probably 78 percent are Hindus.

The Roman Catholic Church is a mere 20 million in a Christian population of about 32 million, according to some estimates. The 2021 census has not been held, and accurate population data is not available. There is not much that has been swept under the carpet.

The two-year family synod — which concluded before the Synodality or Walking Together exercise began involving the hierarchy, clergy, religious and laity — in India had been faulted for the absence of any training of the people to participate in the vast exercise that looked deep into problems faced by families living in complex and greatly differing cultural circumstances and historical practices.

The ensuing data did not fully reflect social, economic and other issues faced by families including marital discord, addiction, unemployment and stress in the youth, and their unpreparedness to face the highly competitive and aspirational society that had developed in India in the 25 years of economic liberalization.

The Synodality synthesis admits right at the beginning that although “the comfort of being led by clergy/religious is still prevalent, the role of the laity as co-responsible collaborators in the Roman Catholic Church in India has begun, but is yet to take root in many dioceses.”

This gently acknowledges that 75 years after the end of colonialism, and with a native-born hierarchy and clergy, for many the Church is the mai-baap, the mother and father, in a rather literal manner. Material resources are controlled rightly by the spiritual leaders.

The paper more than succeeded in its goal of “apprehending common points of convergence as well as the minority or marginal voice that is worthy of mention.” For the record, the reports from 129 of 132 Latin dioceses totaled over 1,500 pages.

A look at the map easily shows contiguous regions of north India, the Chhotanagpur and central Indian regions populated by indigenous or Adivasi tribes, the distinct tribes of Northeast India, the Konkan region and the south Indian states. Each of them is culturally unique, linguistically rich, and economically at different stages of development.

“An awareness of being part of the Universal Church together with the clergy and religious was a first for some of the faithful,” the report says. Apart from various age and linguistically or ethnically divided groups, the poor, migrants, separated faithful, LGBTQIA+ people, were also consulted, together with people of other churches, ecclesial communities and faiths.

The people writing the synthesis acknowledged that organization and facilitation of consultations were led by clergy in many dioceses “where lay involvement has not yet come to the fore.”

‘Consultation’ in some parishes was limited to answering questionnaires instead of in-person interaction. But there are many dissenting fires burning that could be inferred from another admission that “some of the consultations ignored the recommended synodal disposition and turned into forums for criticism.”

It is a good augury that the Church leadership acknowledges, through this paper, that there is a concern about communion among the dioceses, between dioceses and religious congregations, and among the three sui iuris churches.

Discrimination based on caste, language, ethnicity, economic, academic and social status divides the community. Families are threatened by alcoholism, drug addiction and broken marriages and they distance themselves from the Church. Inadequate pastoral care to such families and those at the peripheries impinge upon communion and community building.

This is perhaps the first time since independence that the Indian Catholic hierarchy and community confess to these ills, some of them verging on sins. Like casteism.

The paper, as the voice of the leadership, not surprisingly underplays the several sexual and property or financial crimes that have scandalized the Indian Church in recent years — though perhaps not to the extent of the American and European groups where millions of dollars have had to be paid in reparations to victims.

It puts the blame on “Clericalism.”

“In a few cases, it appears in verbal, sexual and monetary abuses. Some lay faithful have had hurtful experiences of abuse of authority and power by the clergy as well as by ordained and non-ordained leaders of religious congregations and institutions. The situation has worsened due to the long tenures in positions of authority and, in certain instances, due to the absence of ecclesial leadership.”

If only other denominations, faith, and even governments had admitted as much!

The Latin Church is, however, clear that there is much that needs to be done — beginning with the training of the hierarchy, clergy, religious and laity in their mutual, and interlocked relationship.

Understandably again, the bishops lean heavily on the strong shoulders of Pope Francis who said the synodal path “requires leaders who can journey with the people, sometimes being ahead, sometimes behind, and sometimes in the middle.”

Bishops and priests — the paper does not use these two words — must delegate authority, listen to all, lead prudently and be ready to be led. “People expect Church leaders, especially ordained ministers, to be role models — humble, spiritual, approachable and marked by a spirit of self-sacrifice, and they are grateful for the many who lead exemplary lives. It is for each diocese to put figures for these categories.

In rebuilding a strong Church, the synod process has focused on two ecclesial realities that require special mention. The first is the Basic Ecclesial Communities (BECs) for community building through fellowship programs, Bible study and retreats. The second is assisting the Khrista-Bhaktas (Devotees of Christ) present in a few dioceses, who do not receive baptism due to social and political exigencies.

The leadership acknowledges recent learnings in the aftermath of the Covid pandemic. Pastoral care of the ill and the afflicted is a priority and meeting the spiritual needs of migrants. The Church helped hundreds of thousands of migrant laborers who trudged home during the pandemic, but with a large number of priests also falling prey to the illness, house-bound elderly people were mostly denied pastoral care.

The more positive suggestions involve recognizing the laity role in the building of the Church and the need to give it — particularly the women — a greater role in leadership and governance. There is however no roadmap as to how this is to happen. Similarly, the exhortation to use mass media and social communications to make the community more cohesive needs deadlines and methodology.

The paper suggests new participatory structures such as forums for teachers, doctors, lawyers, and finance experts, at the parish level to involve the expertise of the faithful. An inventory of human resources could be taken in each parish so as to identify and enable people to participate.

FRANCIS LOBO
Church leaders instead of helping families looted everything from a family in the name of spirituality .They even gone to the extend of kidnapping old parents. I could not get justice from my Church leaders
Reply

CHHOTEBHAI
I have not seen the national synthesis pubished in any journal or portal in India. Is it a secret document, thereby defeaing the very purpose and dynamics of the synod?
Reply