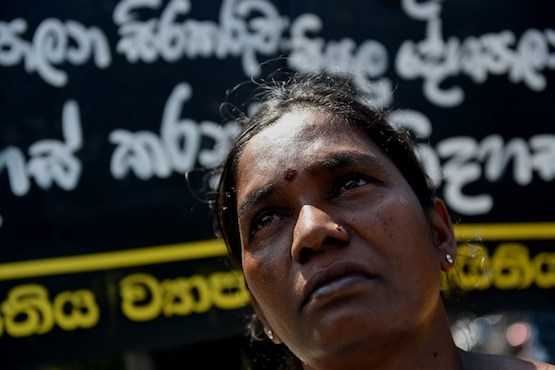 A Tamil protester demanding the release of activists being held under tough anti-terror laws in Colombo in this file photo. (Photo by Ishara S. Kodikara/AFP)

In his address on Sri Lanka's Independence Day on Feb. 4, President Maithripala Sirisena reaffirmed the government's commitment to take the post-war reconciliation process to a successful conclusion to help develop the country socially and economically.

His public commitment comes at a time when a special effort is needed to rebuild the confidence of the international community and the Tamil minority in the transitional justice process. "All of you know that to achieve [development] goals, it is necessary to strengthen national as well as religious reconciliation in the country," he said.

However, the latest report from the task force on reconciliation met with a lukewarm reception from the government and that has added to the disquiet in the international community and ethnic minorities. The task force obtained submissions from the general public, many of whom were directly affected by three decades of war.

The task force focused its findings on the commitments made by the government to the U.N. Human Rights Council in Geneva in October 2015.  The government's commitments included setting up four new reconciliation mechanisms: a truth commission, an office of missing persons, an office of reparations and a special court to try war crimes. The government also pledged to make the laws more human rights-friendly and to demilitarize former war zones.

The report's recommendations were supported and appreciated by the international human rights community because they sought to meet international standards.The report itself provides material that is invaluable in terms of concepts and cases that could be used for a public education campaign.

However, the lukewarm, if not negative, response from those in the government was clearly visible. The problem that the government seems to be having is that the recommendations do not correspond to the sentiments held by the majority Sinhalese population. This is especially true of the recommendation that there should be international participation in the proposed special courts, meaning foreign judges, prosecutors and investigators. Bad press focusing on the hybrid court structure has deflected public attention away from all other recommendations.

The task force recommended hybrid courts because they felt that the Tamils completely lacked confidence in the impartiality of the Sri Lankan judicial system when it comes to crimes committed by the security forces. There have been several cases where defendants, who were members of the security forces, have been acquitted.

The security forces are today routinely described as war heroes by government and opposition leaders. The issue is whether the judicial system can ignore the factor of ethnicity.

The challenge for the government will be to take the recommendations and implement them in a manner that is politically viable. The government's hold on power is stable so long as the two main coalition partners, the United National Party and Sri Lanka Freedom Party, are in agreement.

The difficulty is that the government needs to persuade the Freedom Party, which is now headed by President Sirisena, to go along with politically controversial decisions taken on inter-ethnic relations. Where constitutional reforms are, the Freedom Party has already stated its position in a conservative manner. They have said that they are not in favor of ratifying constitutional change via a referendum that reduces the scope for reform.

It is important to note that constitutional reform constitutes one of the four pillars of transitional justice and is internationally accepted both by the U.N. and scholars as the right roadmap to reconciliation. The other three pillars are: truth seeking, accountability (including special courts for war crimes) and reparations.

The Office of Missing Persons would fall into the category of truth seeking. Those who have had their family members go missing during the war prioritized ascertaining their fates. The law setting up this mechanism was passed in 2016 in parliament but has yet to be gazetted. Reports say that this is on account of resistance by the defense authorities who fear that it will be used against them in war crimes trials. This resistance needs to be overcome internally and not externally.

It is unlikely that international pressure on the government will compel it to take action that it deems to be politically unviable. The international community is likely to give the government the time and space it requests to move the reconciliation process forward. From 2009 onwards it was the United States that was at the forefront of U.N. Human Rights Council resolutions in Geneva that sought to compel the government to adhere to international norms of human rights.

With President Donald Trump giving priority to national security issues the leadership role of the United States in the process is likely to diminish leaving a void that only the Sri Lankan government's commitment can fill ahead of the ongoing  U.N. human rights session in Geneva which ends on March 24.

The model that Sri Lanka may wish to adopt might be the reconciliation process followed in Colombia which earned its president the Nobel Peace Prize in 2016. The armed conflict in Colombia lasted over 50 years and led to over 260,000 deaths. The first peace agreement that was signed in September 2016 was narrowly rejected by the people at a referendum.

The second Colombian agreement in November 2016 was ratified by parliament and contained a provision for amnesty of those accused of minor crimes during the war. There will be no foreign judges but there will be international observers in the Special Peace Jurisdiction, the justice system set up to try war crimes and crimes against humanity committed during the conflict, which will have a time frame of 10 to 15 years for transitional justice to be effected.

Apart from the Office of Missing Persons that the Sri Lankan government legislated into law, there are three other specific mechanisms that the government has promised: The Truth and Reconciliation Commission, Office of Reparations and the Judicial Accountability mechanism.

According to reports the government has progressed on these tasks too. However, when it comes to implementation there will be a need to create empathy amongst the general population to deal with the hard issues of the past.

In October 2015, the government co-sponsored the U.N. Human Rights Council resolution in Geneva that called for the promoting of reconciliation, accountability and human rights. It is necessary that the government fulfill commitments it made in that resolution and release of civilian land held by the military, release prisoners held without charge for years, demilitarization, the removal of the Prevention of Terrorism Act and establishing a truth-seeking and accountability mechanism.

There is also awareness that those from the former government, led by former president Mahinda Rajapaksa, who denied that large numbers of civilians died in the war, and who even claimed initially that there were "zero civilian casualties" are waiting in the wings to take over the reins of governance if the opportunity presents itself.

In which case, many of the gains achieved by the post-2015 government will be put into jeopardy. There are indications that the international community will be prepared to give Sri Lanka the time and space to grapple with the politically difficult issues of truth and accountability with regards to the war and bring about a lasting political solution. But they will also continue to insist that Sri Lanka accounts for the past, both to its own people and to the international community.

Jehan Perera is the executive director of the National Peace Council of Sri Lanka.