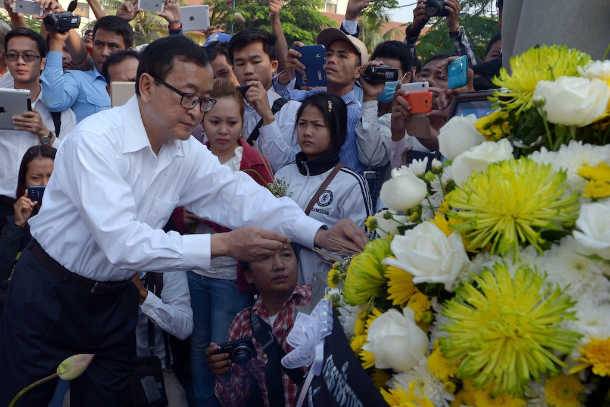 Sam Rainsy lays flowers at an event in Phnom Penh on Jan. 22, 2015, to mark the 11th anniversary of the death of labor union leader Chea Vichea. Rainsy has pledged to return from exile to Cambodia on Nov. 9. (Photo by Tang Chhin Sothy/AFP)

After living in exile for more than three and a half years, Cambodian opposition leader Sam Rainsy says he will return to the country on Nov. 9, Cambodia's Independence Day.

“Let’s return to take back our homes, our land and our country from Hun Sen. Don’t let him rob them from us,” Rainsy told supporters in Australia on Aug. 19, according to Radio Free Asia.

The announcement has been met with both enthusiasm and skepticism. Rainsy, 70, is widely seen as Cambodia’s most important opposition leader. For over 20 years he has challenged the long-lasting rule of Prime Minister Hun Sen. In 2013, he and co-leader Kem Sokha came close to victory when their Cambodian National Rescue Party (CNRP) won 55 of the 123 parliamentary seats. In the commune elections in 2017, the CNRP did even better, winning almost 44 percent of votes.

But the current situation is entirely different.

A few months after the commune elections, the CNRP was dissolved by Cambodia’s Supreme Court. Kem Sokha is under house arrest on charges of treason, while 147 CNRP members and supporters have been summoned for questioning this year, according to Human Rights Watch. Several CNRP leaders live in self-imposed exile and the Cambodian government threatens to arrest them if they decide to return.

“Of course we are concerned about that. No one wants to be arrested or killed,” said Mu Sochua, the deputy leader of the CNRP and Cambodia’s former minister of women and veterans’ affairs.

She and other opposition leaders plan to join Rainsy when he returns from exile in France. “This time it won’t be just Sam Rainsy. We are going together with 16 members of parliament from the European Union. And we are mobilizing people to join us.”

In his meeting with supporters in Australia, Rainsy announced that he will bring home two million Cambodian migrants now working in Thailand, Malaysia, South Korea, Japan and other countries. Their mutual goal is to restore democracy in Cambodia, which transformed into a one-party state after a widely criticized election in 2018.

“It’s our duty to be part of the development of Cambodia and the restoration of democracy. The only way to do that is to be at home,” Mu Sochua said.

But it’s not the first time that Rainsy has announced his return to Cambodia. Since his self-imposed exile in late 2015, he has told his supporters repeatedly that he would soon be back in his home country to restore democracy and push Hun Sen out of power. But so far that hasn’t happened.

It’s why his new plans have drawn a mixed response on social media. On his Facebook page supporters call him a hero and say they have full faith in him. Others openly doubt that Rainsy will keep his promise. While in exile the opposition leader was sentenced to prison terms in several cases, including insulting the king, inciting military personnel to disobedience and defaming Hun Sen. The cases were widely seen as politically motivated.

“I can’t trust what he promises or says,” said Noan Sereiboth, a political observer involved with the political discussion group Politikoffee. “He has a lot of excuses when he tells a lie. Everything is always possible for a politician like him.”

Only challenger to Hun Sen

Rainsy is widely seen as the only politician popular enough to challenge Hun Sen, the authoritarian leader who has been prime minister since 1985. But with Cambodia having a history of political violence, Rainsy’s return could lead to chaos. In 1997, Rainsy and a group of supporters were the target of a grenade attack that killed at least 16 people. In 2014, protests by garment workers and CNRP supporters ended in a brutal crackdown and the deaths of at least four people.

With all that history in mind, Hun Sen needs to act responsibly this time, Mu Sochua said. “If we are arrested or killed, there will be an uprising for sure. There will be bloodshed and chaos. That means a return to the past. We are proposing an alternative to the one-party state that Cambodia is right now. Otherwise, how much longer will it last? Eventually the people will rise up.”

Paul Chambers, an expert on Cambodian politics and a lecturer in politics at Thailand’s Naresuan University, said that after Rainsy’s broken promises he is not yet convinced.

“But I understand the difficulty because of the violent situation that could be waiting for him. It reminds me of what happened in the Philippines in the 1980s when [Ferdinand] Marcos led the country. When his chief opponent Benigno Aquino came back to live there again, he was immediately shot dead when he arrived at the airport. This sort of possibility would frighten anyone,” he said.

Chambers believes that if the CNRP leaders return from exile, they must have made some sort of deal with the government.

“If there’s a deal, it all depends on Hun Sen. He controls everything: the armed forces, defense and the police,” he told ucanews.com. “Then we have to ask: what does Hun Sen get out of it? Maybe then the EU and the U.S. will listen and hold back their sanctions. Perhaps Hun Sen doesn’t want to totally depend on China, so a trickle of democracy could restore the image of Cambodia a little bit and improve international relations.”

What’s certain is that even though he has been in exile for almost four years, Rainsy continues to be hugely popular among Cambodians.

“People believe in him because he’s the hope for the Cambodian people to rescue the nation and to make real reforms happen,” said observer Noan Sereiboth. “Even though some supporters have lost their trust in him, we don’t see anyone who can replace him.”

Speaking from Tokyo, where she is to mobilize support for Rainsy’s plan to return from exile, Mu Sochua said there is no alternative anymore. “We have concerns. But we can’t continue with saying that we shouldn’t do it and leave Cambodia to China. We are going to restore democracy and save Cambodia for the Cambodians.”