Is Pope Francis at odds with the Holy See?

People who were 'in the loop' are now in the dark 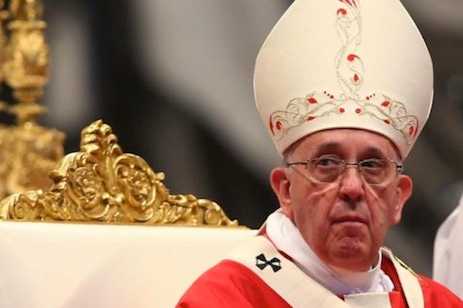 By Paddy Agnew for the Irish Times

It was possibly a watershed moment in Holy See media relations. The scene was the Sala Stampa of the Holy See [on July 9]. Australian Cardinal George Pell was presenting the New Economic Framework for the Holy See, a document which outlines proposed major reforms not only to IOR (the Vatican bank) and to APSA (the Vatican City treasury), but also to all the various Vatican-run media. Halfway through the press conference, a reporter from Milan newspaper Corriere Della Sera asked a question. She wanted to know why, among the six new lay members of the board of IOR, there was no Italian representative. For a brief moment, almost the entire press room started to laugh.

So, what do you want to do? Put the foxes in charge of the chickens again? Has not the recent traumatic history of IOR been besmirched by the nonchalant ease with which, thanks to a bit of blind eye and to a bit of maladministration, Italian high finance (Banco Ambrosiano, Enimont) and sometimes even organised crime used IOR for their own money-laundering purposes.

Cardinal Pell, of course, was much too polite to acknowledge any such thoughts but, rather, he assured us that there will soon be Italian bankers on the IOR board. The point, though, is there for all to see. One aspect of Pope Francis’s reform drive, but by no means the only aspect, involves changes in the all-too Italian ways of much of the Roman curia, which at times can still seem modelled on the court of a 16th-century Tuscan city republic.

Recently, Italian media reported the Pope’s alleged annoyance at the fact that the former secretary of state,Cardinal Tarcisio Bertone, was having major reconstruction work done on a 700 sq m flat inside the Vatican. Francis, of course, continues to live in 70 sq m in the relatively modest surrounds of the Vatican’s Santa Marta residence, rather than in the Apostolic Palace. When questioned about his apartment, Cardinal Bertone pointed out that (a) the Pope was not annoyed about it, (b) it was 300 sq m, not 700, and (c) that all the reconstruction work was being done at his own expense. Curiously, in the middle of these polemics, the papal Twitter issued a tweet which read: “A sober lifestyle is good for us and enables us to share more fully with those in need.”

By the way, Cardinal Pell also confirmed at his Economic Framework press conference that an internal investigation is ongoing in relation to a €15 million loss by IOR in a company called Lux Vide, money loaned allegedly thanks to the intervention of Cardinal Bertone.

The contrast between Pope Francis and the seeming privileges of some of those around him, as well as his inclination to keep his own counsel, are clearly provoking a “nervous” moment in the Holy See. People who were “in the loop” are no longer informed; rather, they are left waiting and wondering just what the Pope has in mind. In such a climate, it would be mistaken to speak of “opposition” to Francis, but what is clear is that not everyone in the Holy See is on the same page as the Pope on the question of communion for divorcees, clerical celibacy, north-south divide, Vatican finances or clerical sex abuse.

Recently, the members of one of Francis’s many new commissions were astonished to find that the wording of an agreed press release had been significantly changed. A mere mistake or the desire of someone in the secretariat of state to slow up the reform process.

When Pope Francis says that “the Eucharist is not a prize for the perfect” in Evangelii Gaudium, he would appear to be moving a debate (likely to dominate the next two vitally important Synods on the Family, in October 2014 and 2015) on the ban on divorcees and remarried receiving communion. Yet, almost as soon as he says this, German Cardinal Ludwig Muller, Prefect of the Congregation of the Doctrine of the Faith, gives interviews in which he says that allowing divorcees communion is against Church teaching from the time of the Council of Trent.

That “nervousness” may explain the “correction” offered by senior Vatican spokesman Fr Federico Lombardi to comments attributed to Pope Francis in an interview in last Sunday’s La Repubblica newspaper. In particular, when the Pope points out that clerical celibacy is a question of custom and practice, rather than Christ’s teaching, there are those in the Holy See who do not want to hear.

As we said, not all on the same page.

Full Story: Why aren’t Pope Francis and his cardinals singing from the same hymn sheet?