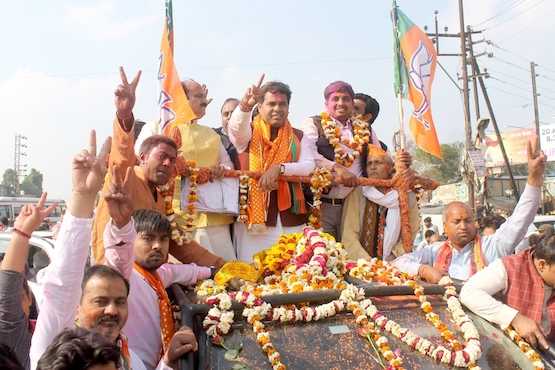 A BJP candidate celebrates his party's victory in the Uttar Pradesh assembly elections in Mathura on March 11, 2017. (Photo: IANS)

On March 11, when the result came in for elections in five Indian states, especially the most populous Uttar Pradesh, it marked a leap forward for Hindu nationalists.

The success of the pro-Hindu Bharatiya Janata Party (BJP) rested safely on the shoulders of its leader and Prime Minister Narendra Modi as he packaged and presented his winning image of a Hindu zealot who struggles hard for India’s development.

Modi overcame difficulties. His decision to demonetize high-value currency notes in November 2016 pushed millions of poor into hardship but it was presented as fight against the black money of the rich and ultimately helped the BJP win back those voters.

The February polls in five states including Manipur and Goa, which have sizeable Christian populations, Modi played the role of "dream merchant" promising jobs, good roads and improvement in law and order in a country that has long suffered bad governance.

In Uttar Pradesh, where the BJP has been in power only once in the last two decades, Modi addressed over 50 rallies ostensibly exposing misgovernment and caste-based politics. At each place, he also reminded his audience that he is still looking out for Hindu interests.

In Uttar Pradesh both rival Congress and Samajwadi parties tried to reach out to the Muslim minority. It made Modi’s task easier because 80 percent of Uttar Pradesh’s 200 million people are Hindu.

The result was a Hindu vote consolidation for the BJP and the near decimation of all rivals, helping them take 312 of the 403 seats in the state legislative house.

"If BJP tries to pull Hindus by creating fear about Muslims, other parties try to create the same fear about Hindus in Muslims," said Shahnawaz Khan, a Muslim and BJP leader.

The BJP strategically did not field Muslim candidates and the number of Muslim legislators in the newly-elected house has dropped down to 25, an all-time low.

The result and BJP strategy makes many observers wonder if the Hindu nationalist party is pushing religious minorities into political irrelevance in its march toward a Hindu-only nation.

Some Hindu leaders surely see it that way. Sakshi Maharaj, BJP parliamentarian, told me: "We achieved one milestone of our Hindutva agenda [Hindu hegemony] as the number of Muslims in Uttar Pradesh assembly has come down to 25. In 1990s we reduced Muslim voters and leaders to a political non-entity in the central Indian state of Madhya Pradesh and now we have done this here. We thank the people of Uttar Pradesh for that."

The BJP has achieved a key goal: the exclusion of Muslims from politics without needing to be explicit about it.

This development was helped by the political failure of rival parties, chiefly the Congress party, led by an Italian-born Sonia Gandhi, widow of a former Indian Prime Minister, and their son Rahul Gandhi.

While she has been unwell for quite some time, Rahul Gandhi as the Congress Vice President has been unable to match the electoral aggressiveness of Modi.

Congress, in the past, has ruled intermittently in coalitions, espousing secularism and equal rights for all religions but were unable to keep voter confidence.

"The secular brigade did not do much for the minorities. Their bluff was always going to be exposed one day," said BJP leader Sudanshu Trivedi.

Agra-based Jamaluddin Quereshi, a Muslim, said: "Indiscriminate attacks on Prime Minister Modi, unreasonable actions in the name of Muslim welfare and an inability to contain corruption have discredited the secular parties."

To many, the mandate this year also shows that not only Hindu hardliners have prevailed, it is also a sign that Hindu nationalists are continuing to rest their hopes on Modi to deliver Hindu hegemony.

Nirendra Dev is writer and journalist based a New Delhi.