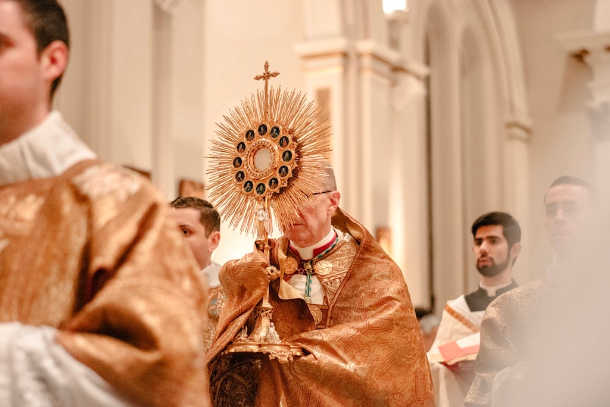 The question of priestly celibacy is back in the spotlight under Pope Francis. (Photo: unsplash.com)

As Pope Francis shepherds the controversial (with the Church’s conservative wing) decision to allow married men to become priests in remote parts of the Amazon, could his trip to Asia be the next beachhead for what is clearly his program of clerical reform?

Specifically, most of the bishops attending the recent Synod on the Amazon agreed to ordain married men in special circumstances in the region, where some faithful who want to attend Mass and receive the Eucharist don’t see priests for months, even years.

It is here that the fundamental problem with restricting the clergy to celibate male priests can be understood. The whole point of Christianity is to introduce people to Jesus Christ through both pastoral work of clergy and the taking of the sacrament. By restricting this to a class of unmarried men, the Church is restricting the ability of itself to do what it claims to set out to do. Strong critics have even argued that this is heretical, but that is the sort of drama one would expect from clericalist conservatives, so let us not go there.

We need to follow where Pope Francis is going and to understand how apparently “radical” his ideas are, so consider this: the last time a synod considered the issue of married men as priests was in 1971, the third synod of Pope Paul VI. To the dismay of progressives — and those worried about already declining numbers in the priesthood — Paul had reaffirmed priestly celibacy in 1967.

“The undersigned, who through the trust of the German bishops have been called as theologians into the commission for questions of faith and morals, feel themselves compelled to submit the following considerations to the German bishops,” they wrote.

But the 1971 synod supported the pope on celibacy, albeit with a significant minority against him, and the issue lay dormant for 48 years until Pope Francis put it back on the table.

The final document of the Amazon summit said many in the region had “enormous difficulties” in receiving communion as well as seeing a priest.

The final proposal was to “ordain as priests suitable and esteemed men of the community” who had already had “fruitful” experiences as deacons and who “receive an adequate formation for the priesthood, having a legitimately constituted and stable family.”

“No priest is ordained without first being a deacon,” Cardinal Michael Czerny said, adding with some understatement that the proposal was a great “pastoral change” for the Church.

This will be followed by a document that Francis hopes to write by the year’s end. As the official Vatican news site pondered, “his conclusions will be eagerly awaited by faithful who wonder if it will include an opening to lifting a ban on married priests, at least in some circumstances, in a part of the world where evangelical Protestant churches are increasingly winning converts.”

It is clear that Francis has chosen the remote Amazon region as the place to test reforms that are clearly meant more broadly for the developing world where the Church is growing and thriving and where he sees the future of the Church.

This was particularly pertinent to Brazil, the country that has the most Catholics but where the faith has been under attack from evangelical Christians who are fast growing their numbers.

Now, the rise of evangelicals, as well as pockets of Catholics living in remote areas, is a strong thematic in Asia.

In Thailand, where the pope will arrive tomorrow, there are seven main hill tribes. The Hmong, Karen, Akha and Lisu have thousands of Catholics. These ethnic groups and others are spread right across the mountains of southeast Asia from India through Bangladesh, Myanmar, Thailand, Laos and Vietnam and into southern China

In the Philippines, the heartland of Catholicism in Asia, evangelical Protestants are making significant inroads, and the story repeats itself in Indonesia and Cambodia. The standout is South Korea, where wealthy Christians use their faith for business networking and build mega churches — a theme also present in China.

The Koreans are also sending out missionaries into South and Southeast Asia. The Economist reported earlier this year that evangelical and Pentecostal Christianity is growing more quickly in Asia than most parts of the world, with over 200 million adherents in 2015, up from 17 million in 1970.

This fits right into Pope Francis’ reasoning for ordaining married men as priests.

It is also worth wondering whether China may be a country where a consideration about married priests is made sooner rather than later. At least two Chinese bishops that the pontiff brought back into communication with the Holy See have families. Using those examples, it’s undoubtedly true that other priests and probably prelates across China have “unconventional” family arrangements that do not fit in with a celibate priesthood.

The Chinese Church is struggling to find enough priests and bishops, while the ruling Communist Party has recently cracked down on minors attending Masses, Bible classes and other church activities.

As Francis noted at the opening of the synod: “If everything continues as it was, if we spend our days content that ‘this is the way things have always been done,’ then the gift vanishes, smothered by the ashes of fear and concern for defending the status quo.”

Of course, one of the great hurdles to any such changes is the rampant clericalism in pretty much all Asian countries where church leaders — who love the faux pomp and dressing up — see themselves as part of select elites and shudder with horror at the thought of letting anyone “lesser” into their club. The irony is, of course, lost on such men.

The views and opinions expressed in this article are those of the author and do not necessarily reflect the official editorial position of ucanews.