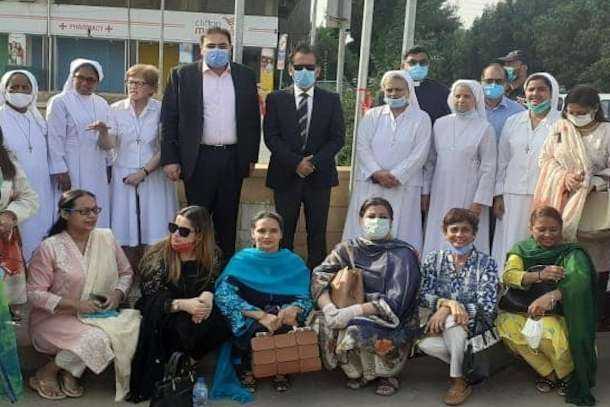 A road in the southern Pakistani port city of Karachi has been named after a Catholic nun to recognize her services to education.

Sister Berchmans Conway was born in Ireland in 1930 and joined the Convent of Jesus and Mary in 1951 in Willesden, London, before moving to Pakistan at the age of 24 to dedicate her life to teaching in the Muslim nation.

In 2012, she was awarded the Sitara-e-Quaid-e-Azam, one of the country’s highest civil awards. The award citation celebrated her “constant adherence to the call of duty over a span of 59 years, which has made Sister Berchmans a living example to emulate.”

In July 2019, Sister Berchmans was decorated with the Benedict Medal by St. Mary’s University, London, at Westminster Cathedral.

She taught in Convent of Jesus and Mary schools in Karachi, Lahore and Murree.

They also presented the official documents of Berchmans Road to Sister Lagan and thanked all the nuns for their services to education in Pakistan.

Mariyam Kashif, a Catholic teacher and social activist from Karachi, said Sister Berchmans deserved this honor for her lifetime of service in Pakistan.

“Her contribution in the field of education is enormous and she will be remembered forever. Sister Berchmans dedicated almost 71 years of her life to Lahore, Murree and Karachi, teaching Muslim, Christian, Parsi and Hindu children.”

Father Mario Rodrigues said the inauguration of Berchmans Road was a recognition of the nun’s service. “She built the characters, taught discipline, humility and encouraged independent thinking,” he said.