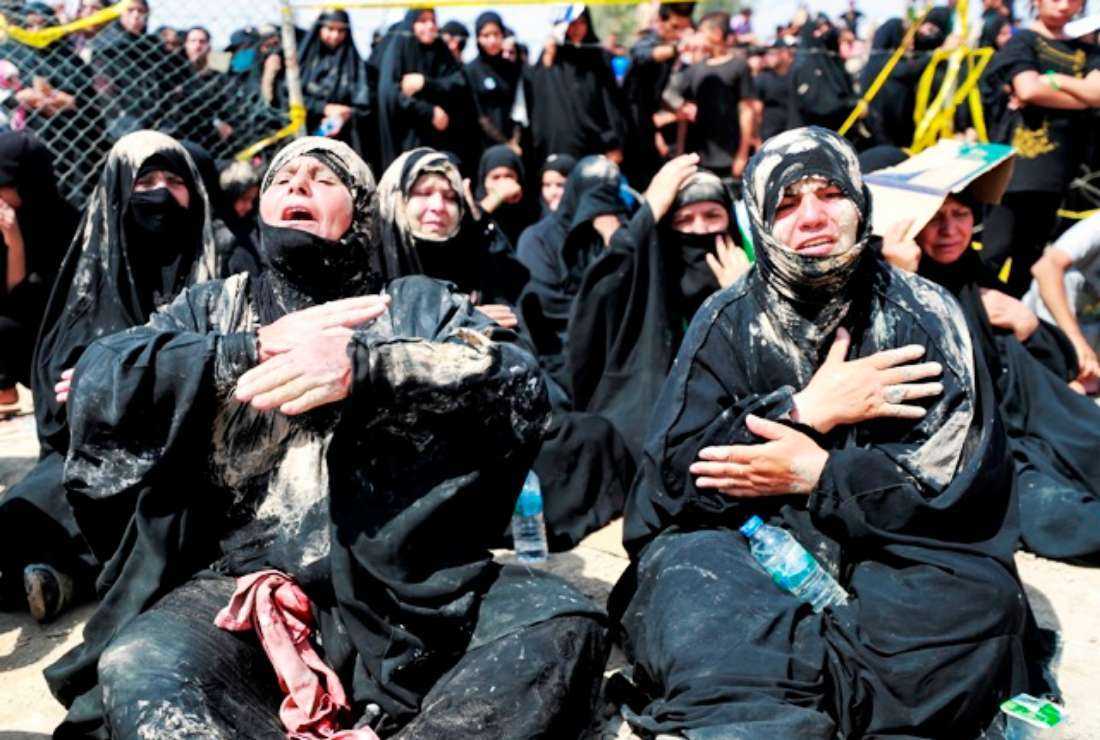 Iraqi Shiite Muslim women cry as they watch worshippers re-enacting the Battle of Karbala as they mark the peak of Ashura, a 10-day period commemorating the seventh century killing of Prophet Mohammed's grandson Imam Hussein, in Iraq's capital Baghdad on Aug. 9. (Photo: AFP)

The sectarian distribution of the main political offices in Iraq has proved its biggest bane, taking its toll on the war-scarred Middle Eastern nation and its people.

Despite holding polls 10 months ago, the beleaguered country may be heading for another election as the political leadership failed to cobble together a government.

The oil-rich nation’s 2005 constitution, influenced by the US, is only helping to prevent the formation of a unified and representative government.

Cardinal Louis Raphael Sako, the patriarch of the Chaldean Church, has said that the quota system (muhasassa) has produced “corruption and injustice.”

Iraq needed new approaches and new ways in which to place its top offices at the service of the people, and not partisan interests, the cardinal said on July 31.

Baghdad's Green Zone, which is home to diplomatic missions and government buildings, including the parliament, has been occupied by followers of Shiite cleric Moqtada Sadr, whose Saarirun (Arabic acronym for Alliance toward Reform) movement tried to elect a Kurdish president — the first step in forming a government.

The Saarirun, an electoral alliance formed ahead of the 2018 general election, emerged as the largest block in last year’s polls but fell far short of a majority. Al Sadr’s efforts were marred by a rival Shiite alliance, the Coordinating Framework, backed by Iran.

Since 2005, the president has been a Kurd, the prime minister a Shiite, and the president of the parliament a Sunni. However, deep political fissures exist between and within the sectarian groups.

The traditional tensions between minority Sunni and majority Shiite communities have escalated and are spreading to other areas of Iraq as armed factions of both groups are active and thriving in areas outside their geographical and societal boundaries.

Al-Sadr once headed the powerful militia, the Mehdi Army, which fought against the US occupation. Though the Mehdi Army was disbanded in 2008, its armed fighters joined its successor group, the Peace Brigades.

They are roaming freely in the country to take on the rival Coordinating Framework which includes Iran-aligned politicians like former Prime Minister Nouri al-Maliki, paramilitary groups, the Patriotic Union of Kurdistan and a few Sunni outfits.

The Sunnis and the Kurds, although favoring Al-Sadr’s victory, are leaving no stone unturned to prevent Shiite infighting which may outweigh any potential gains accrued by them from the general election.

Global and regional actors like the US, Turkey and Saudi Arabia have exploited the strategically weak and divided Iraqi state to their advantage. Iran is hoping to empower the Shiites in Iraq through state-sponsored militias and proxies who have infiltrated the Iraqi military and security services.

After his 73 lawmakers quit to make way for a government by the rival Coordination Framework, it named former cabinet minister Mohammed Shia al-Sudani as prime minister. This angered the Sadrists and created the current logjam and the occupation of parliament. Al-Sadr opposed his candidacy alleging that al-Sudani would serve the interests of Iran.

On Aug. 5, tens of thousands assembled at the Green Zone as Al-Sadr used the Friday prayers to press for his demand to hold fresh elections. Even Baghdad's 42 degrees Celsius (108 Fahrenheit) heat did not prevent his followers, mostly men, from staging the new power play to score over their rivals.

The Iraqi political blocs must start a national consultation to end the institutional stalemate that is paralyzing the country, before "a tsunami wipes us all away," Cardinal Sako observed.

The scenario is frightening, and delays cannot be tolerated, the Iraqi cardinal said.

As political parties are following narrow sectarian agendas, people in the country are plagued by nepotism, corruption, unemployment; physical insecurity; and a dismal state of affairs in healthcare and education, he said.

When Saddam Hussein, a Sunni, was overthrown in 2003, the Shiites, who are the majority in Iraq, saw it as a chance to take revenge. The Kurds, who feared that any intra-Shiite fighting would backfire on them, capitalized on it to push for autonomy for Kurdistan in Eastern Iraq, and the Sunnis felt sidelined and began to make amends to stave off the repercussions.

The only people left empty-handed in the ethnoreligious political bargaining in Iraq were the minority Christians who ended up with little representation in political institutions, which often came with multiple threats that dramatically dwarfed their number.

Christians are less than 5 percent of Iraq’s population, while Shiites cover nearly 60 percent.

Currently, Iraq earns record oil income because of high prices and the nation has been passing through a period without major conflict since the defeat of the Islamic State group five years ago.

The skyrocketing global oil prices would have helped alleviate the acute social crisis in the country. But there is little appetite for major changes.

According to the Ministry of Petroleum, Iraq exported oil worth US$11.3 billion, a figure not seen for decades, in June-end. State-owned oil firms sold a barrel of oil for $112 in June, while it was a whopping $140 in March.

The country’s 2005 constitution, written during the political instability after the war and the occupation, is causing a continuous cycle of dysfunctionality. It begs international help to review it not just for bringing justice to Christians, but for establishing peace for the beleaguered people in Iraq.