Christians need to be recognized not only by words but on the ground as equal citizens, says patriarch 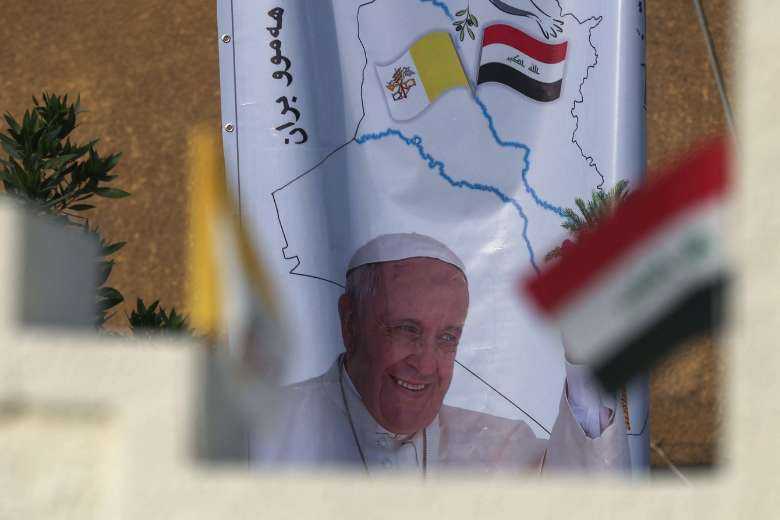 An Iraqi flag flutters across from a banner depicting Pope Francis at St. Joseph Church in central Baghdad on March 10 during a Mass held following the visit of the pontiff to the country. (Photo: AFP)

Political leaders had "very nice words" during Pope Francis' early March trip to Iraq, but now Christians pray "that those words, those declarations, will be applied on the daily level, on the ground," said Syriac Catholic Patriarch Ignace Joseph III Younan.

"Christians need to be recognized not only by the words but on the ground as equal citizens. Until now, we have laws (in Iraq) discriminating against Christians and other minorities," he told Catholic News Service from the patriarchate in Beirut.

The Christian population in Iraq numbered around 1.5 million in 2003. With the U.S.-led invasion in 2003 and, especially with the 2014 Islamic State group takeover of the Ninevah Plain in August 2014, there are now 200,000 Christians at the most, the patriarch said.

"This is the reality," he said. Syriac Catholics account for at least 25% of that number, he said.

"Christians in Iraq have been suffering for a long time, and this kind of uprooting, of exodus is very dangerous for their survival," he said.

Patriarch Younan told CNS Pope Francis "had a message of peace, of hope and joy to those who have remained in Iraq. But we should ask ourselves, how many Christian Iraqis will go back home?" he asked, in reference to the hundreds of thousands who have immigrated to other countries. "Because the situation in Iraq is still not yet well secured. Chaos still reigns."

"How will it be, the resonance of the pope's proclamation of the Gospel, in the hearts of the Muslim majority in Iraq? It's up to God, and we keep hoping and praying and will try to proclaim the truth always in charity," the patriarch said.