Public anger has grown over the death of Mahsa Amini, 22, following her arrest and assault by Tehran's morality police 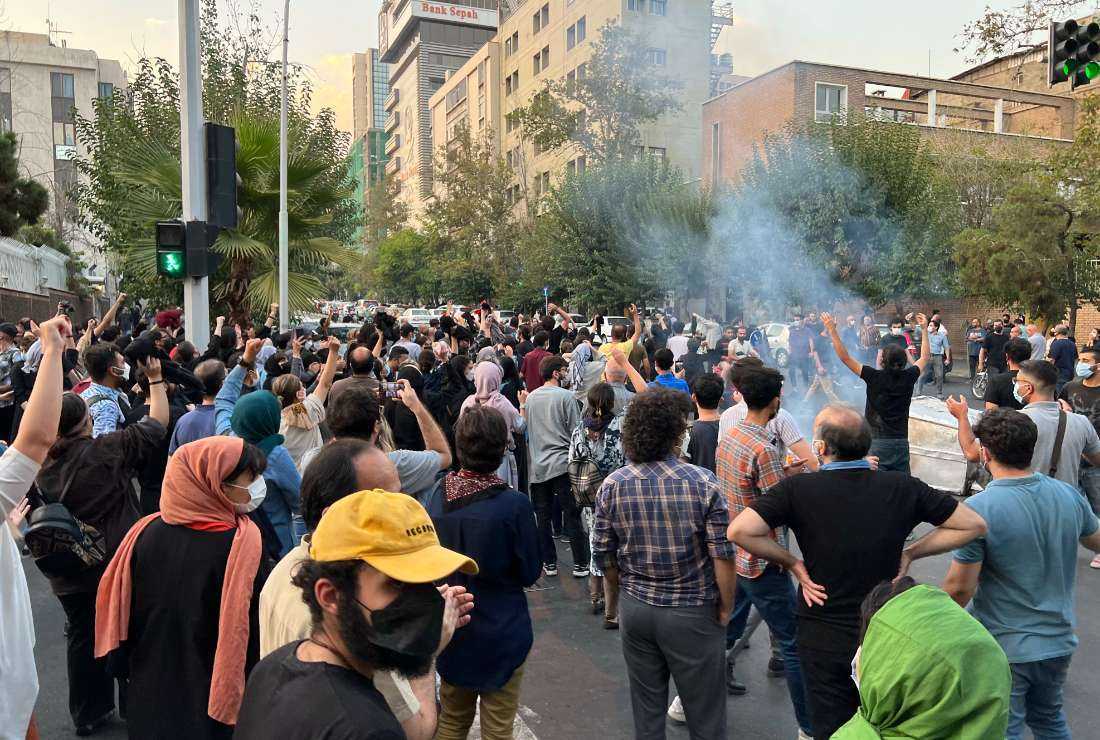 People gather during a protest for Mahsa Amini, a woman who died after being arrested by the Islamic republic's morality police, in Tehran on Sept. 19. (Photo: AFP)

Fresh protests broke out Monday in Iran over the death of a young woman who had been arrested by the "morality police" that enforces a strict dress code, local media reported.

Public anger has grown since authorities on Friday announced the death of Mahsa Amini, 22, in a hospital after three days in a coma, following her arrest by Tehran's morality police during a visit to the capital on September 13.

Demonstrations were held in Tehran, including in several universities, and the second city Mashhad, according to the Fars and Tasnim news agencies.

"Several hundred people chanted slogans against the authorities, some of them took off their hijab," Fars said, adding that "police arrested several people and dispersed the crowd using batons and tear gas".

A brief video released by Fars showed a crowd of several dozen people, including women who had removed their headscarves, shouting "Death to the Islamic republic!"

A "similar gathering" took place in the northeastern city of Mashhad, the Tasnim agency reported.

On Sunday, police made arrests and fired tear gas in the dead woman's home province of Kurdistan, where some 500 people had protested, some smashing car windows and torching rubbish bins, reports said.

Anger
The morality police units enforce a dress code in the Islamic republic that demands women wear headscarves in public.

Police have insisted there was "no physical contact" between officers and the victim.

Tehran police chief General Hossein Rahimi said Monday the woman had violated the dress code, and that his colleagues had asked her relatives to bring her "decent clothes".

He again rejected "unjust accusations against the police" and said, "the evidence shows that there was no negligence or inappropriate behavior on the part of the police".

"This is an unfortunate incident and we wish never to see such incidents again."

Students rallied at Tehran and Shahid Beheshti universities, demanding "clarification" on how Amini died, according to Fars and Tasnim news agencies.

A spokesperson for the European Union's foreign policy chief Josep Borrell said Amini's "unacceptable" death was a "killing" following the injuries she suffered in police custody.

The perpetrators must be held accountable and the Iranian authorities must respect its citizens' rights, the spokesperson added in a statement.

France said her death was "deeply shocking" and called for a "transparent investigation... to shed light on the circumstances of this tragedy".

Amini's death has reignited calls to rein in morality police actions against women suspected of violating the dress code, in effect since the 1979 Islamic revolution.

Filmmakers, artists, athletes and political and religious figures have taken to social media to express their anger.

Distraught father
State television on Friday broadcast a short surveillance video that showed a woman identified as Amini collapsing in the police station after an argument with a policewoman.

Amjad Amini, the victim's father, told Fars that he did "not accept what (the police) showed him," arguing that "the film has been cut".

He also criticized the "slow response" of the emergency services, adding: "I believe Mahsa was transferred to the hospital late."

Interior Minister Ahmad Vahidi said Saturday he had received reports that the emergency services had arrived "immediately" at the scene.

"Mahsa apparently had previous physical problems and we have reported that she had undergone brain surgery at the age of five," Vahidi said.

Her father, however, "insists that his daughter had no history of illness and was in perfect health", Fars reported.