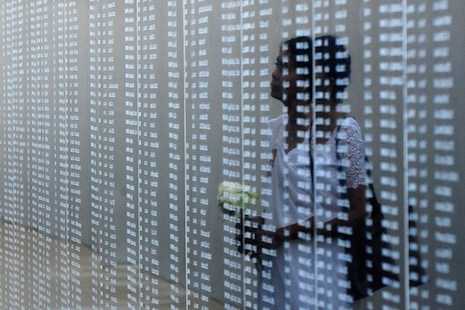 A Sri Lankan resident reads through names of fallen soldiers on a memorial in Colombo. The U.N. on Sept. 16 urged Sri Lanka to investigate war crimes with the help of the international community. (Photo by Lakruwan Wanniarachchi/AFP)

A highly anticipated United Nations report has detailed "horrific" abuses that occurred during Sri Lanka's civil war and urged the country to establish an internationally backed court to investigate war crimes and ensure justice, a move supported by many Catholic Church officials.

The report from the U.N. Human Rights Office, released Sept. 16, documented killings, sexual violence, enforced disappearances, torture and attacks on civilians between 2002 and 2011. Taken together, investigators said the violence represents "patterns of grave violations" committed on both sides of Sri Lanka's civil conflict, which came to an official end in 2009 when the government overran Tamil guerrillas in the country's north.

"The report reveals violations that are among the most serious crimes of concern to the international community as a whole," Zeid Ra'ad Al Hussein, the high commissioner for human rights, said during the report's release.

Sri Lanka's current government has promised to account for atrocities committed during the 26-year-long civil war. However, it has proposed a domestic truth and reconciliation commission rather than one with the direct involvement of the international community.

Zeid said an investigative court should include international judges, prosecutors and lawyers because deep mistrust persists in what is still a divided nation.

"A purely domestic court procedure will have no chance of overcoming widespread and justifiable suspicions fueled by decades of violations, malpractice and broken promises," Zeid said in a statement.

"Sri Lanka has a dismal history of seeking justice for the victims via appointing commissions of inquiry and there has been no accountability of any kind domestically for any past violations," Bishop Joseph Ponniah of Batticaloa said in the letter.

"We urge the U.N. Human Rights Council to refer Sri Lanka to the Security Council, taking into account the gravity of the crimes committed," he added.

Ruki Fernando, a human rights activist and a consultant to the Justice, Peace and Integrity of Creation Commission of the Conference of Major Religious Superiors, said many survivors and families of victims won't see a purely domestic accountability mechanism as being credible.

Political representatives from Tamil areas of Sri Lanka are also calling for a significant U.N. involvement.

M.K. Shivajilingam, a member of the northern provincial council, said Tamils want the U.N. to "establish an international justice mechanism for war crimes, and not a domestic mechanism."

Sri Lanka's former president, Mahinda Rajapaksa, oversaw the war's brutal finale and continued to reject international involvement in any reconciliation effort. Current President Maithripala Sirisena has promised reforms and more actively engaged with the international community, but has still insisted that reconciliation should be handled domestically.

Father Reid Shelton Fernando, a university lecturer and the chaplain of the Young Christian Workers movement, said the new administration's attitude has been a comparatively positive one. However, the truth must still come to light in order for a sense of justice to prevail.

"The truth has to be exposed and the state has an obligation to deal with war widows, whether they are from the north or south, as they are citizens and unfortunate victims of the war," said Father Fernando.