Invest in love, pope says on first World Day of the Poor 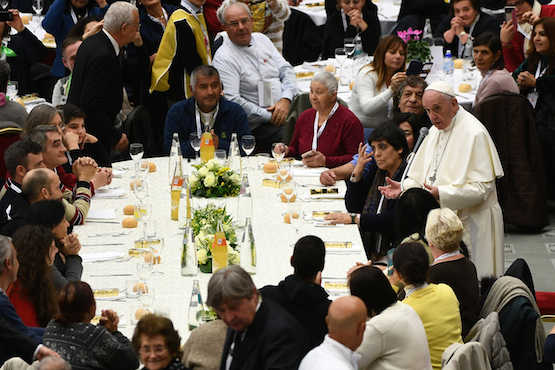 Pope Francis, right, delivers a speech at the Paul VI audience hall where 500 people in need and those who assist them had lunch, on Nov. 19 at the Vatican. Pope Francis celebrated Mass to mark the first World Day of the Poor.  (Photo by Vincenzo Pinto/AFP)

People have a basic choice in the way they live: either striving to build up treasures on earth or giving to others in order to gain heaven, Pope Francis said.

"What we invest in love remains, the rest vanishes," the pope said in his homily Nov. 19, the first World Day of the Poor.

Between 6,000 and 7,000 poor people attended the Mass in St. Peter's Basilica as special guests, the Vatican said. While almost all of them live in Europe, they included migrants and refugees from all over the world.

Some 1,500 poor people joined the pope in the Vatican's audience hall later for a meal, while the other special guests were served at the Pontifical North American College — the U.S. seminary in Rome — and other seminaries and Catholic-run soup kitchens nearby.

If in the eyes of the world, the poor they have little value, he said, "they are the ones who open to us the way to heaven; they are our 'passport to paradise.' For us it is an evangelical duty to care for them, as our real riches, and to do so not only by giving them bread, but also by breaking with them the bread of God's word, which is addressed first to them."

Where the poor are concerned, the pope said, too many people are often guilty of a sin of omission or indifference.

Thinking it is "society's problem" to solve, looking the other way when passing a beggar or changing the channel when the news shows something disturbing are not Christian responses, he said.

"God will not ask us if we felt righteous indignation," he said, "but whether we did some good."