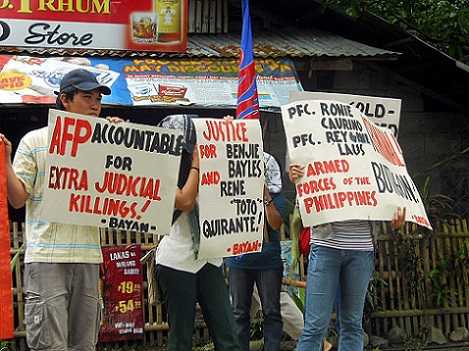 Activists accuse the military of human rights abuses during a recent protest in Manila. (Photo by Arkibong Bayan)

An international group of lawyers yesterday expressed alarm over what it calls a "state of impunity" in the Philippines and called on the government to punish human rights violators.

The International Association of Democratic Lawyers (IADL) wound up its annual governing bureau meeting in Paris yesterday with a damning assessment of the Philippines’ record of addressing rights abuses.

The group expressed dismay that Manila has failed to do everything possible to immediately arrest and prosecute retired general Jovito Palparan who has been labeled as "the face of the most horrendous abuses of human rights" in the country.

Palparan has been accused of masterminding the disappearance and killings of dozens of human rights activists in the past ten years.

He is currently on the run after being indicted for the alleged kidnapping and disappearances of two student activists in 2006.

"The continued failure to hold [Palparan] demonstrates continuing impunity for extrajudicial killings, disappearances, torture and other violations," the IADL said.

The group called on its members worldwide to join the hunt for Palparan and prosecute him wherever he may be.

Human rights lawyer Edre Olalia, secretary-general of the National Union of Peoples' Lawyers, said the failure of the government to punish perpetrators of rights violations like Palparan is the "veritable explanation" as to why abuse victims and their families "wallow in injustice without an end in sight."

The IADL noted that continuing human rights violations has affected peace negotiations between the government and communist rebels.

The group called on both parties to resume peace talks based on previous agreements and resolve the "underlying social, economic and political reasons for the armed conflict."