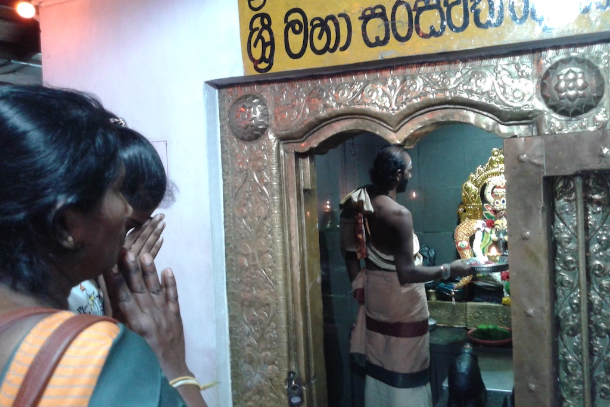 A mother and daughter attend a service at a Hindu temple in Sri Lanka. Interfaith marriages are on the rise in the Buddhist-majority nation. (Photo: UCA News)

She teaches Christianity at a school where 90 percent of children are Buddhist and very few are Christian.

Her husband promised before marriage that he would allow her to practice her religion freely.

She went to live in her husband's house. Her mother-in-law and relatives in and around the house are Buddhists.

Marian, 49, said the biggest challenge facing Catholics is bridging the religious and cultural gap when living among the Buddhist majority.

"Their children experience a multi-religious atmosphere but spouses have fights about children taking their mother or father's religion entirely," she said, recalling her day-to-day struggles as a teacher.

"Whatever the approach is, it is prudent to discuss openly these cultural and religious struggles prior to marriage. If not, there are problems after marriage.

"Practicing two different religions under one roof is a big challenge, and to make some decisions on a regular basis is very difficult." 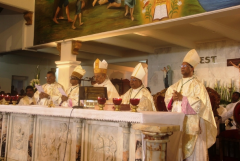 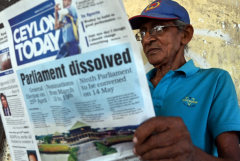 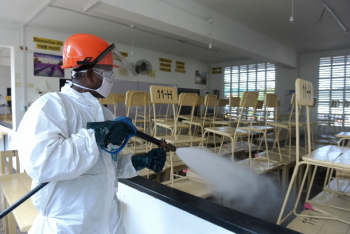 Badulla Diocese has 21,985 Sinhalese and Tamil baptized Catholics among its 1.65 million people. It has 19 parishes with 42 resident priests.

"Interreligious marriages can have serious problems and create crises between the spouses, parents and their relatives," said Father Sumith Priyantha Fernando, newly appointed parish priest of St. Mary's Cathedral in Badulla and former parish priest of Church of the Risen Christ in Mahiyangana.

"Elderly Buddhists believe that marrying someone from another religion is leaving their heritage and family traditions, which they protect from one generation to the other.

"I conducted only five church marriages for the last five years at the Risen Christ church and three of them were interreligious marriages."

Father Damian Fernando, vicar general of Ratnapura Diocese, said the real challenge in mixed marriages come when the non-Catholic partner retains his or her faith and their children are not baptized.

"Interreligious marriages are more common and the couple often fail in bringing up their children in sacramental life," said Father Fernando.

"Catholic marriages between Catholic women and Buddhists are increasing and understandable since the country has a Buddhist majority.

"It is a trend and the Church should be concerned about the issues. The Church in the whole country does not have any definite numbers for interreligious marriages, but we know about them through our pastoral experiences."

Ratnapura Diocese has 21,855 baptized Catholics among its 1.78 million people. It has 23 parishes with 27 resident priests.

Understanding a partner’s religious views is important and couples should not let their emotions run high.

Sandaya Malkanthi, a Catholic who married her Buddhist boyfriend 13 years ago, said her father-in-law was not happy about her evening prayers and Sunday Mass attendance. "Cultural traditions between two partners make problems," she said.

Moses Ranaweera, a counselor, says that quite often faith-based life is absent from interfaith marriages.

"The difference of faith of the spouses also affects their family life. Marriages by conversion are quite common, but it should be done with free will,” he said.

"The Catholic Church should help those who undergo suffering and those who are at risk of divorce."

Marian said her parents encouraged her to divorce when she had some marital problems.

"Thank God, we are still together as a family. I help many teachers and friends to understand each other so that they can avoid divorce,” she said.