Leaders of minority faiths in Myanmar joined Aung San Suu Kyi in her Yangon home to pray for the country's fallen heroes including her father, General Aung San.

The interfaith prayer meeting marked the 70th anniversary of the death of nine patriots who were assassinated on July 19, 1947, a year before Myanmar gained independence from Britain.

At the event, Suu Kyi urged the more than 30 people in attendance to live with a noble spirit and to strive to help build a nation built on love.

Auxiliary Bishop John Saw Yaw Han of Yangon, attended the gathering which he described as a special privilege.

"Suu Kyi realizes the role of religious leaders is very important for nation building and peace so she organized such a gathering," Bishop Yaw Han told ucanews.com.

Bishop Yaw Han said July 19 is a sorrowful but proud day for Myanmar.

"They sacrificed their lives for the people," said the bishop referring to the nine patriots of whom five were Buddhists, two were Muslim, one a Christian and the other a Hindu.

"So, we all must work together towards stability and peace what the fallen heroes have built up," he said. 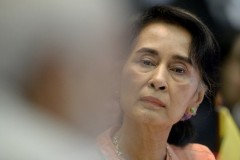 Sharing of resources is 'key to long-lasting peace' in Myanmar

People in Mandalay prepare to lay wreaths to commemorate the 70th anniversary of the death of nine patriots who were assassinated on July 19, 1947. (ucanews.com photo)

Saung Lwin Aung, a Muslim leader from Yangon, said he prayed that the country will have equal rights, freedom, justice and a durable peace. Saung Lwin Aung added that he prayed for the success of the Suu Kyi-initiated peace process.

"The gathering of all religious leaders is very important as hate speech is growing in the country so we must join hand in hand to fight it through love speech," Saung Lwin Aung told ucanews.com.

The interfaith prayer meetings have been held annually and were initiated by Suu Kyi's mother, Daw Khin Kyi who died in December 1988.

As part of a separate program, Suu Kyi held a Buddhist merit-making ceremony by inviting monks into her home and offer meals on the morning of July 19.

Thousands of people across the country's 14 states and divisions commemorated the day known locally as Martyrs' Day on July 19.

Suu Kyi's ruling National League for Democracy party said in a statement that the country needs to take lessons from Martyrs' Day and to strive towards democratic values based on national reconciliation, equal rights, and peaceful coexistence.