Knowing one's own religion and respecting other religions are necessary, says Catholic priest 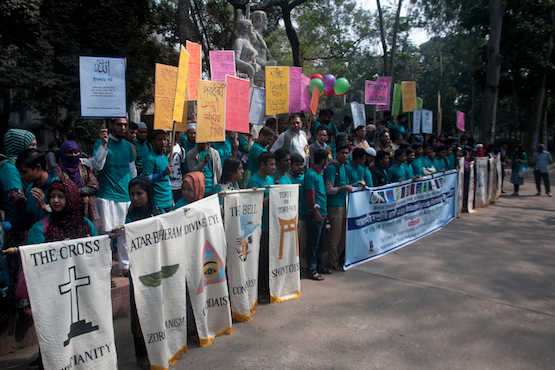 Teachers and students of Dhaka University rally to mark the start of World Interfaith Harmony Week on Feb. 1 (Photo by  Stephan Uttom)

Bangladeshi educators are opting to forging interfaith harmony as a way to tackle religious extremism in the country.

"To stop irreligious activities in the name of religion, we must promote interfaith harmony from our own grounds and embrace the religion of humanity," said A.A.M.S. Arefin Siddique, vice chancellor of Dhaka University.

The department of World Religions and Cultures of Dhaka University organized the rally to mark the beginning of weeklong social activities.

"This is a significant week for us and also for the world at a time where there is ongoing violence and terror in the name of religion in the Middle East, in our country and around the world," said Siddique.

"If we could know our religion better there would be no violence in the world," he said adding that this would also ensure justice, rights and peace for all people.

Hirendranath Biswas, president of the Bangladesh Hindu Society for Social Reformation pointed out that the root cause violence in the name of religion lies at misunderstanding and misinterpreting religions and each other.

"It's high time we take an active role in promoting religious harmony to crush this evil force of religious extremism," he added.

Muslim-majority Bangladesh, long known for religious harmony and secular culture and traditions, has seen a sharp rise in religious extremism in recent times.

Last year, four atheist bloggers and a publisher, whose writings and publications were critical of religions especially Islam, were hacked to death by Islamic militants.

Alleged operatives of terrorist group, which calls itself the Islamic State gunned down an Italian aid worker and a Japanese farmer, also last year.

Islamic extremists have also targeted Hindu temples and mosques and shrines of minority Muslim sects Shia and Ahmadiyyas in the country.