Denials and intimidation over death rates in communities near industrial plants 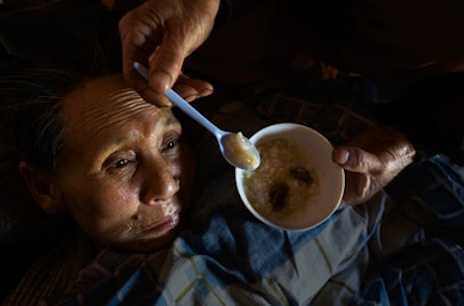 By Jonathan Kaiman for The Guardian

Xie Zhengqiang is no stranger to death but he trembles every time he thinks about his nephew. When doctors diagnosed three-month-old Xie Yuling with a rare auto-immune disease in 2011, the baby's father was out sea crab fishing, so Xie was sent to the Shanghai hospital where his nephew was undergoing treatment. Three times a week he cycled alone past his fishing village's tucked-away tangle of concrete-hulled houseboats, past the miles of adjacent chemical, pharmaceutical and power plants, anddown along the burbling Yangtze river, where his family collects drinking water.

Then one day, he got the call. "The doctor tried everything to make him better, but he didn't get better, and he died," said Xie, 24, gazing up at the paper mill which towers above his home. "It was definitely thepollution. What else could it have been?"

Yanglingang residents count their home as one of China's "cancervillages" – small communities near polluting factories where cancer rates have soared far above the national average. Chinese media, academics and NGOs estimate that the country is home to 459 of them, spread across every province except far-western Qinghai and Tibet.

New cases seem to emerge monthly, each a painful reminder that China's past three decades of breakneck economic growth have carried a tremendous human cost. Yanglingang is home to only a few hundred people and at least 11 have died of cancer since 2003. Xie's neighbour, Liu Shudong, is dying of oesophageal cancer. Another neighbour, Wang Jinlan, died of breast cancer in 2010. Last year, stomach cancer claimed his friend's 30-year-old wife.

In February, the ministry of environmental protection mentioned cancer villages in its latest five-year plan – the only ministry-level acknowledgement of the issue since it was first reported in 1998. Chinese NGOs and activists hailed the report as a much-needed step towards environmental transparency. Yet interviews in three cancer villages across two provinces revealed that many central and local authorities continue to treat the issue as they long have: with denial, intimidation and silence. Even the environmental ministry's acknowledgement was a mistake, said Chen Wanqing, deputy head of China's national cancer registry. The ministry has been reprimanded.

Health and environmental officials organised a joint meeting during the National People's Congress, a political gathering in March to renounce the report's wording.They sent missives to provincial officials urging them to restrict usage of the term in local media. "This is a medical issue – it can't be acknowledged from outside the ministry of health," Chen said. "The statement was not correct, or not appropriate."

However, the link between pollution and poor health is well established. Cancer mortality rates in China have risen 80% over the past 30 years, making it the country's leading cause of death. In cities, toxic air is a primary suspect; in the countryside, it's the water. More than 70% of the country's rivers and lakes are polluted, according to government reports;almost half may contain water that is unfit for human contact.

"Fundamentally, the situation isn't getting any better," said Liu Lican, a Guangzhou-based journalist who has published a book about cancer villages. Pollution-related cancer, he said, can elude detection for years. "So even if the cancer was caused by pollution that's already gone, maybe gradually more and more of these villages will emerge."

Yanglingang lacks a public water supply, and before the government built the industrial zone in the early 2000s, the villagers didn't mind; the river was clean, its fish abundant. But for eight years, Yanglingang has been sandwiched between the Nine Dragons paper mill and a power plant that billows white smoke from four tall stacks, covering the houseboats in a thin layer of ash. The mill discharges its waste water directly into the Yangtze, leaving a maroon residue on the rocks along its shoreline.

Villagers purify the water with alum powder before drinking it, but even well-treated batches carry a faint industrial aftertaste. "Everybody here has some form of illness," Xie said. His mother is bedridden with bronchitis. His infant nephew died of Evans syndrome, which has no known cause but is not usually fatal. The family took out £7,000 in loans to pay for the baby's medical expenses, and Xie doubts that they will ever be repaid.

Despite abundant anecdotal evidence for China's profusion of cancer villages, scientific proof has been elusive. When Wu Yixiu, toxics campaigner at Greenpeace East Asia, first visited Yanglingang in 2010, she assumed that establishing a causal connection between its pollution and cancer problems would be fairly straightforward – its population is so tiny, the disease so widespread, the pollution so caustic. "It's unimaginable that their health will not be affected by the quality of this water," she said.

Yet there are too many specific chemicals involved and too many types of cancer; diagnoses are spread over too many years. "You need to establish the fact that it's a certain chemical that's causing certain cancers, and this chemical is being discharged from this very factory," she said. "This would require years of observation and tracing disease records."

About 140 miles south of Yanglingang, in a far-flung suburb of Hangzhou City, 45-year-old Wei Dongying has spent almost two decades trying to build a similar case. Pollution has haunted Wuli village, population 2,000, since the nearby Nanyang chemical industry zone opened its doors in 1992, gradually covering its waterways with black streaks and soapy-white froth.

"So many people here have gotten cancer, they want answers, but they've been given nothing," said Wei.

Between 1992 and 2004, 60 villagers died of cancer, Wei said. Last year, it killed another six. Wei keeps samples of tainted village water in a corner of her three-storey tiled house and stacks of fraying documents – petitions, official letters, test results – in thick manila envelopes on her shelves.

When she complained to national environmental authorities in 2004 – she had already tried local petitioning – the municipal government promised to shut down Nanyang's polluting factories within three years. Yet the industrial zone continues to operate unimpeded. Wuli's water still frequently runs black; on some days the air smells like burning refuse. Last summer, signs for a new chemical plant, Hangzhou Cairui, began appearing at a nearby intersection. "They never asked for the villagers' approval," Wei said.

Government-approved researchers have visited Wuli, but most seem keen to debunk Wei's claims. "They say the number of deaths isn't too high," she said. "I say, wait until someone in your family gets cancer, then tell me it's not too high." They have tested the water, but refuse to publicise their results. After Wuli received a flurry of media attention in early April, local authorities threatened residents with unspecified consequences for their outspokenness.

Villages such as Dongxing, in Jiangsu province – a four-hour drive north from Yanglingang – are often left to fend for themselves. The Julong chemical plant, which villagers, academic studies and media reports suspect gave more than 100 residents cancer between 2000 and 2005, sits abandoned on the village's southern limits, but its impact may linger for decades. Northern winds sometimes carry a vague chemical scent which villagers say emanates toxic waste buried near the factory ruins. Streams that once coursed through the village have long run dry.Chinese media and academics have discussed Dongxing's cancer rate since 2006, when a reporter for the China Economic Times investigated the plant, which produced 2,000 tonnes a year of the carcinogenic chemical chlorophenol a year. After Julong opened in 2000, the village's ducks, chickens and geese began dying en masse.

Villagers slept with wet towels over their mouths and noses, terrified of inhaling toxic fumes. Air around the elementary school, 300 metres from the factory, smelled so noxious that villagers moved their children to one in a neighbouring township.

Four villagers – Zhu Yuehua, Duan Degui, Bian Junren and Shu Qichang –eventually decided to sue the plant. Zhu has since moved to the nearby metropolis Wuxi, where he works in construction. Duan and Bian died last year in a car crash.

Shu Qichang sits in a white-brick farmhouse flanked by verdant rice paddies, fanning himself in the April heat, weary from heart disease. His eyes are shockred, his cheeks sallow. Petitioning was useless, he said. The county environmental bureau denied the cancer rate was a problem, and the town courthouse would not hear their case.

Thugs detained the farmers near a higher court in Funing County and followed them to the highest provincial court in Nanjing – where the lawsuit was ultimately discarded.

Then in 2010, without giving a reason, the factory closed. Wheat and rice harvests, which markets once refused to buy, are sellable again. Villagers have accepted the status quo; in any case, they've run out of alternatives. "No matter how much we talk about this, they won't compensate us," Shu said. "So we don't talk about it any more."