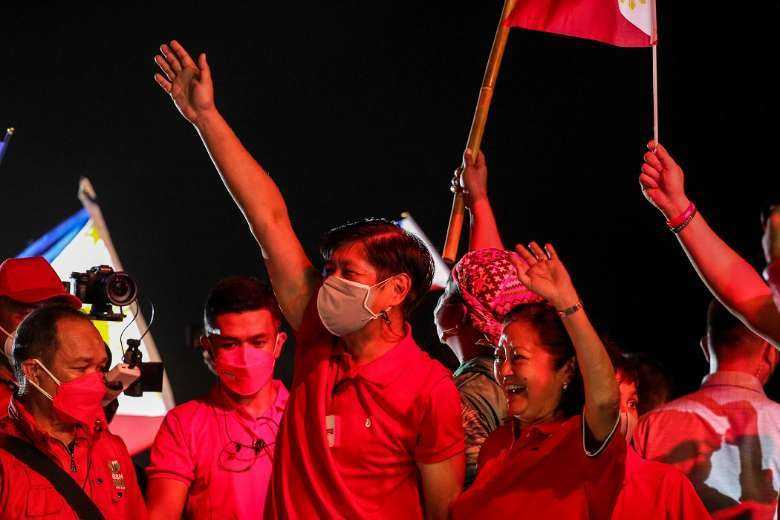 Presidential candidate Ferdinand Marcos Jr. and his wife Louise waving during a campaign rally in Taguig, suburban Manila, on April 24 ahead of the presidential election on May 9. (Photo: AFP)

Backing from the 101-year-old sect, which has an estimated 3  million members, is much sought after by politicians because of its block vote.

It announced its support for Marcos and Duterte on May 4 based on a call for unity which it said was taught in the Bible.

“The unity of Iglesia ni Cristo is recognized by its members as one of the teachings of the Bible that should be followed,” the group said in a television broadcast.

The group, which backed Marcos Jr. in his failed bid for the vice presidency in the last election in 2016, said the decision by its leadership has a biblical basis and must be respected by its members.

“The decision of the Iglesia leadership is respected by its members. Politicians, meanwhile, recognize the help that Iglesia unity may offer to their candidacy on election day,” the group added.

Marcos and Duterte welcomed the endorsement and thanked the group for their “unity vote.”

“I thank the Iglesia ni Cristo for its endorsement. It comes with great honor that comes with a challenge to our capability to unify the country … unite the Filipinos … and guide the citizenry through the crisis brought about by the Covid-19 pandemic,” Marcos said in a statement.

“We will strive to make sure that the confidence bestowed on us by the Iglesia ni Cristo will result in real unity among nation-loving Filipinos and, without hesitation, face together challenges in paving the way for a bright tomorrow for our youth.”

Retired Bishop Arturo Bastes of Sorsogon, however, said unity is only proper if it is based on truth and justice, not lies and fake news.

“The Marcoses keep on saying they are for unity but they have never recognized the billions of pesos they plundered during the time of their father,” Bishop Bastes told UCA News.

He said the Marcos family had never shown remorse, which meant they had failed to recognize the human rights violations the late president committed during martial law.

“Did they even say sorry? Why should the Filipino people vote for those who have not recognized and accepted their past mistakes?” he asked.

Meanwhile, the daughter of the top military man who served under the late dictator Ferdinand Marcos Sr. issued a public apology on May 2 to martial law victims.

Wanna Ver, daughter of the late General Fabian Ver, one of Marcos’ most trusted allies, issued the apology for crimes her father helped commit out of loyalty to the former dictator.

She said the martial law years were not a “golden era” in the Philippines, which the dictator’s son Marcos Jr. was trying to promote on social media, much to the derision of the Philippine Church.

“Most of the people who suffered under martial law suffered systemic oppression at the hands of the Marcos regime,” she told reporters.

“She broke the spell of wickedness in her own generation by acknowledging the sins of the previous generation which she had benefited from. It is never too late for many others whose crimes are known well by God. Please, do yourselves a favor while there is still time,” Bishop David said in a Facebook post.