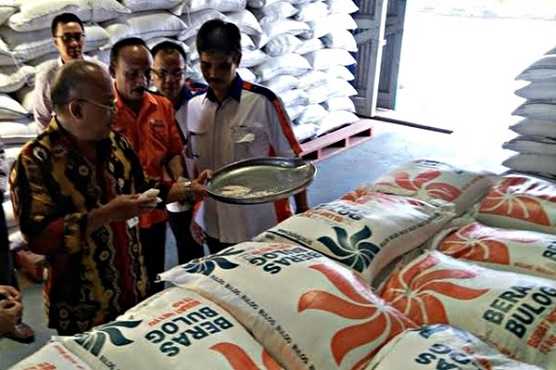 Officials of Merauke Logistics Agency examine rice for the poor before it is distributed to people in Papua. (Photo by Eman Riberu)

Indonesia's "rice for the poor" program, launched nearly two decades ago, is ineffective at reducing poverty and creates dependency on government charity, said a priest in Merauke Archdiocese in Papua.

The program was launched by the Indonesian government in 1998 to subsidize poor families throughout the country, following the 1997 economic crisis that befell Asian countries.

Recently, Coordinating Minister for Human Development and Culture Puan Maharani, who oversees the program, said that the rice subsidy aims to improve the life quality of poor families.

It is a state effort to sustain food sovereignty at the family and national levels, he added.

However, according to Father Anselmus Amo, who heads Merauke Archdiocese's Justice, Peace and Integrity of Creation, this program does not educate society.

"The government should re-evaluate the program, because it makes people dependent on rice subsidies, neglecting their [God given] capacity," said Father Amo.

"If possible, the government should stop it and focus on increasing the productivity of local farmers," he said. Father Anselmus Amo of Merauke Archdiocese in Papua claims that the government's rice for the poor program has made people dependent on rice subsidy, neglecting their own capacities. (ucanews.com photo)

Papua and other regions have abundant natural resources, but farmers do not get sufficient help from the government to maximize the potential of their respective regions. For instance, Papua and Maluku have sago, corn, banana, and other products, and the government should help farmers cultivate these resources, said Farther Amo.

The priest also blamed the government for focusing on agro-industry, such as giving concessions to plantation companies, which damaged millions of hectares of forest, causing species extinction and creating conflicts over land grabs.

Remisius Kaize from Nasem village in Merauke district agreed with the priest that the government should focus more on empowering local farmers which is better in the long run.

However, beneficiaries like him will continue to buy the subsidized rice, despite its low quality, because the price is cheaper compared to the regular market price. Kaize spends only about US$3 for 15 kilograms, a fraction of the price at the local market.

While the people in the village can grow cassava, banana, and sago on their farms, they also need rice and the government's subsidized rice is a cheap option, said Kaize.

The Coordinating Ministry for Human Development and Culture said that about 15.5 million families received subsidized rice in 2016. Each family received 15 kilograms of subsidized rice every month at the cheaper price.

Last year more than 2.5 million tons of rice was distributed to poor families by the National Logistics Agency throughout Indonesia.

According to Haryo Nugroho Broto, head of the Merauke Logistics Agency, the government has allocated about 15,400 tons for the districts of Merauke, Mappi, Boven Digoel and Yahukimo.